The Tampa Bay Lightning captain, Steven Stamkos return to the ice during Game 3 of the Stanley Cup Final. Only 4 games remain in the MLB's regular season. The NBA Conference Finals will soon be decided. Seattle Storm take Game 1 of WNBA Final. 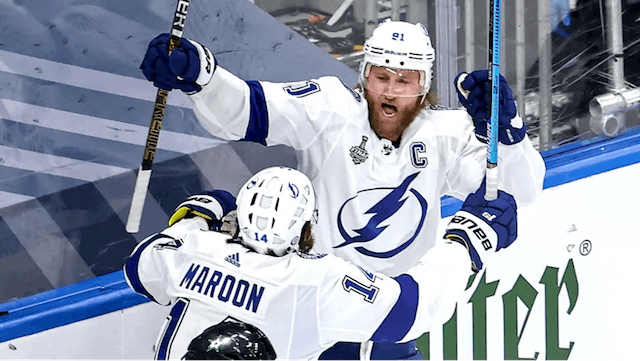 The GIST: Tampa Bay Lightning captain Steven Stamkos knows how to make an entrance. After battling an injury since February, he finally made it back to the ice...and during the Stanley Cup Final, no less.

Tell me everything: Stamkos made his first appearance in nearly seven months in last night’s Game 3 against the Dallas Stars, and he made his presence known right away, scoring on his first shot of the game.

What about basketball?: The Boston Celtics and Miami Heat faced off in a spicy Game 4 last night in the NBA’s Eastern Conference finals. With a 112–109 win, the Heat are now up 3-1 in the series and will nab a spot in the NBA Finals with a Game 5 win tomorrow at 8:30 p.m. ET.

And the WNBA?: After a few inconclusive COVID-19 tests (don’t worry, everyone’s fine!) pushed the series from its original Sunday start, Tuesday’s Game 1 ended up being a thriller. With the Storm leading most of the game, things got shaky when the Lynx mounted a fourth-quarter comeback.

Any other playoff news?: But of course! There are four more game days left in the MLB regular season, and like a high-stakes game of musical chairs, there are 12 teams fighting for six remaining playoff spots. Check out the full standings and playoff bracket here.