Sunday at the Masters

HELLO, FRIENDS! And welcome to Sunday at the Masters. *said in our best Jim Nantz voice* As we head into the final day of the most prestigious event in men’s golf, we put together a collection of our favorite fun facts, memorable moments and unforgettable champs in Masters history to get you set for the big day. Grab a mimosa and settle in. 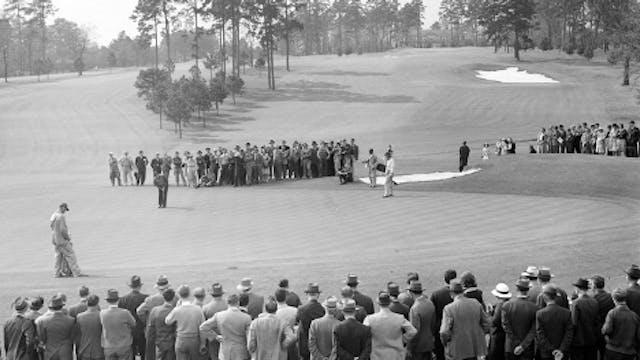 "I must admit the name was born of a touch of immodesty."

🐅 Eye of the Tiger

While not the winningest Masters champ in history (that’s Jack Nicklaus, who we’ll get to in a minute), Tiger Woods is arguably the most notable. Tiger began his reign as golf’s top guy in April 1997 with his first Masters win, only eight months after turning pro. At just 21, he was (and remains) the youngest Masters champ ever.

💯 Age is but a number

Tiger is just one win short of tying Jack Nicklaus, who holds the all-time Masters record of six career victories. And much like Tiger, Nicklaus’ most recent win was his best: by winning the 1986 Masters at age 46, he set the record for oldest player to ever win.

$70,000: The amount Bobby Jones and Clifford Roberts paid for the land upon which they built Augusta National Golf Club in 1931. A steal.

1934: The year the first Masters was held, and won by Horton Smith.

1990: The year Fanny Sunesson became the first and only female caddie to win at the Masters, holding the bag for Nick Faldo.

50: The most consecutive Masters appearances, set by the late Arnold Palmer between 1955 and 2004.

33: The number of hole-in-ones made at the Masters (not including this skipper from Jon Rahm’s 2020 practice round).

20-under: The lowest 72 hole (aka four-round) score in Masters history, recorded by first-time champ Dustin Johnson (DJ) in 2020.

3: The number of Masters champs — Tiger, Nicklaus and Faldo — who have defended their title. And after DJ missed the cut on Friday, that number will stick for at least another year.

🙋‍♀️ Fanny at the Masters

Back to caddie Fanny Sunesson. No woman has ever played in the Masters, and Augusta National only started allowing female members in 2012, which makes Sunesson’s appearance at the 1990 Masters all the more amazing.

These days, Sunesson is retired from caddying and spends her time coaching pros, but she’ll forever be in the Masters’ record books as the first woman who could...and did.

Patrons: Augusta National has very strict rules about what visitors can be called. Announcers are prohibited from saying “fans” and “spectators,” instead they’re called “patrons” who are part of “the gallery.” After CBS commentator Jack Whitaker referred to an excited crowd as a "mob" during the 1966 Masters, he was banned from the tournament until 1972. Harsh.

Amen Corner: From the second half of the 11th hole to the first half of the 13th, Amen Corner is a section of the course where tournaments have been won and lost. The area was named by a Sports Illustrated writer after a jazz song called “Shoutin’ In That Amen Corner.”

Yes, even golf has playoffs sometimes. If two or more golfers are tied at the end of the fourth round, they move on to a “sudden death” playoff where they go head-to-head in a replay of the 18th hole. If they’re still tied, they move to the 10th. No playoff has ever gone to a third playoff hole.

Will we see another hole-in-one today? Another winner decided by a playoff? Will Amen Corner ruin yet another sure thing like Jordan Spieth’s 2016 collapse? Will we see a handshake attempt more awkward than two-time winner Bubba Watson with then-Augusta chairman Billy Payne? You’ll have to watch and see.