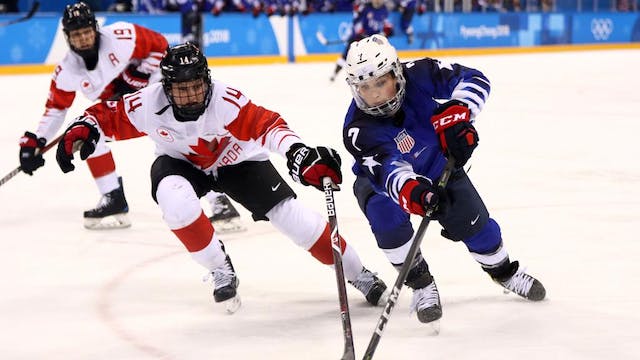 The GIST: If it weren’t for the COVID-19 pandemic, we’d be busy enjoying the IIHF Women’s World Hockey Championship (WWHC) that was set to take place in Halifax and Truro, Nova Scotia, from March 31st to April 10th. And because we miss the good ol’ hockey game so freaking much, we’re highlighting our top three women’s international hockey moments.

3. Team Canada and Team USA are far and away the two powerhouses in women’s hockey — they’ve placed first or second at the WWHC every year since the tournament started in 1990...until last year. The 2019 WWHC saw the Finnish take home the silver after upsetting Canada 4–2 in the semifinals and just losing to the US in overtime (OT) in a v. controversial final.

2. There’s nothing like the rivalry between Team Canada and Team USA at the Olympics, and the 2018 PyeongChang Olympic gold medal game was no exception. After Canada had owned the podium four Olympics in a row (from 2002 to 2014), the US was out for revenge.