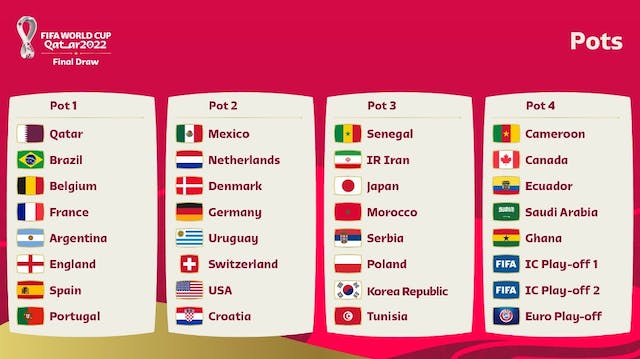 The GIST: Cross your fingers and toes because the draw for November’s men’s World Cup is today, and the CanMNT, who haven’t played in the World Cup since 1986, will soon learn their group fate. So let’s break down the (pretty confusing) process.

The setup: The draw, taking place in World Cup host nation Qatar, begins today at 12 p.m. ET. Based on their international ranking, the 29 teams and three placeholders are currently divided into four pots and will ultimately separate into eight World Cup groups (A through H) — the teams they’ll play against in the tourney’s group stage.

The draw: Now for the exciting part. Host nation Qatar has already been placed in Group A. The other Pot 1 teams will then be randomly assigned (they literally pull their names out of a bucket) Groups B to H. After all Pot 1 teams have been placed, the same is done with the Pot 2 teams, and on it goes.

Zooming out: Amid the excitement, today’s draw also brings Qatar’s human rights abuses squarely into focus. Migrant workers were exploited in the rush to build infrastructure ahead of the World Cup, resulting in thousands of deaths.