The GIST: Yesterday may have been the last time GOATs Diana Taurasi and the aforementioned Sue Bird shared a court. Needless to say...we’re not okay. 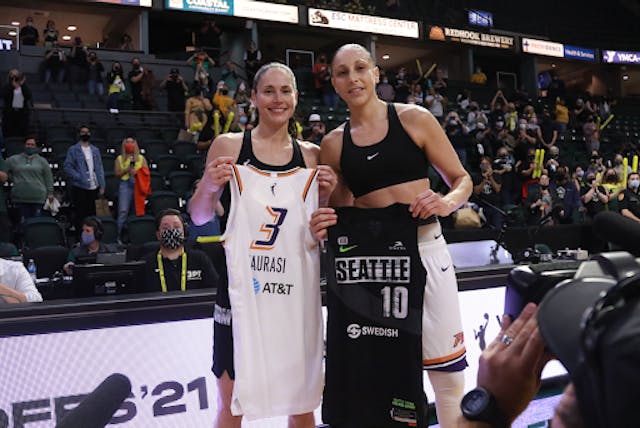 Phoenix Mercury vs. Seattle Storm: Taurasi’s Mercury and Bird’s Storm — the defending WNBA champions — faced off in the first of yesterday’s round two matchups. The Mercury won the 85–80 overtime thriller, but it was longtime rivals and friends Taurasi and Bird who stole the show.

Chicago Sky vs. Minnesota Lynx: In yesterday’s second game, the lower-seeded Sky cruised to an 89–76 win over the Lynx — and the newly named four-time Defensive Player of the Year Sylvia Fowles — to make their first semifinal since 2016.

Tomorrow’s semifinals: The Mercury and Sky have a day to recoup before tomorrow’s best-of-five semis series begin. As the lower seed, the No. 6 Sky will face the No. 1 Connecticut Sun at 8 p.m. ET, while the No. 5 Mercury are set to play the No. 2 Las Vegas Aces at 10 p.m. ET. Let’s dance.