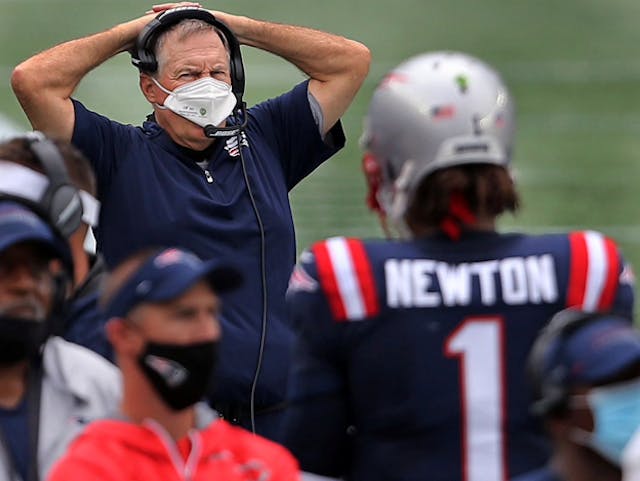 The GIST: With more players and personnel testing positive for COVID-19, the NFL postponed  yet another game, requiring some serious reshuffling of the schedule. Things are getting messy.

Which game was postponed?: After a fourth player tested positive, the New England Patriots’ Week 5 game vs. the Denver Broncos (which had already been rescheduled once) was postponed to next Sunday. The Patriots were forced to shut down their facility for the third time in 10 days. Oy vey.

How long can the NFL keep this up?: TBH, we’re surprised it’s lasted this long. Players are beginning to voice their frustrations with the league’s (mis)handling of positive cases. For example, rather than implementing a bubble or a comprehensive response and appropriate isolation period, the NFL instead announced new penalties for coaches who fail to wear masks when approaching officials.

Ugh. Well, what happened on the field Sunday?: The on-field action was just as chaotic as these scheduling changes. The highlight: the Las Vegas Raiders handing the Kansas City Chiefs their first loss in 336 (!!!) days, snapping their franchise record 13-game win streak.

The Raiders solidified their 40–24 victory in style with this soaring leap to the end zone by running back (RB) Josh Jacobs. Check out more highlights from Week 5 here.