The GIST: For the first time in NCAA women’s basketball history, a freshman is the AP Player of the Year and two Black women will be head coaches in the Final Four. Oh yeah, and there are two thrilling games on deck for tomorrow night. More herstory, please. 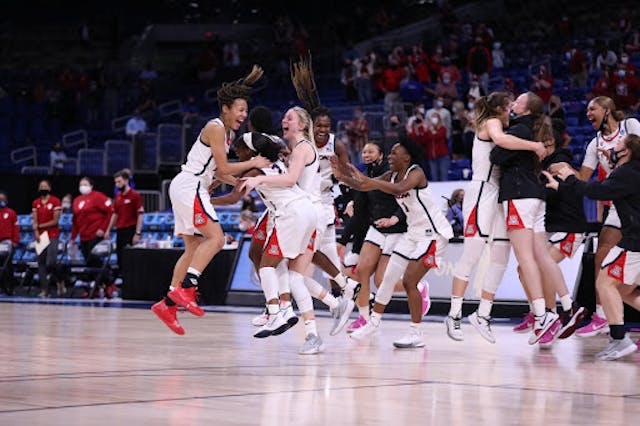 No. 1 South Carolina vs. No. 1 Stanford, 6 p.m. ET: South Carolina rolled in their Elite Eight game, defeating No. 6 Texas 62–34. Meanwhile, Stanford struggled in theirs, falling to the largest deficit of their season before surging to a jaw-dropping 78–63 comeback victory over No. 2 Louisville. Even Ciara and Russell Wilson are fans.

No. 3 Arizona vs. No. 1 UConn, 9:30 p.m. ET: While Arizona is the new kid on the block, reaching the women’s Final Four for the first time in school history, UConn is making their record-setting 13th (!!!) consecutive Final Four appearance. No bad luck here.

The aforementioned herstory-maker freshman Paige Bueckers (pronounced BECKERS) is averaging 20 points per game, but she’ll be up against two-time Pac-12 Defensive Player of the Year, Arizona’s Aari McDonald. What a matchup.