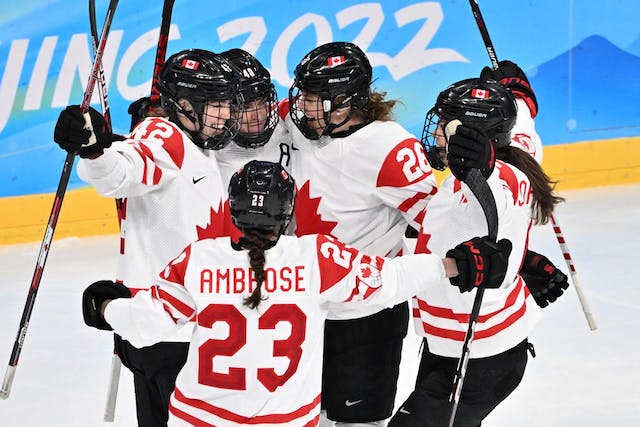 🏒 Hockey: After a 10–3 domination of Switzerland early this morning that saw Canadian Claire Thompson increase her Olympic record for most points by a defender to 12, Canada is officially moving on to the gold medal match. They’re undefeated, and they’re gonna dance.

🛷 Bobsleigh: In a night for the history books, Christine de Bruin won bronze in the monobob’s Olympic debut yesterday, notching her first Olympic medal in the process.

💨 Short track speed skating: After skating to a silver in the men’s 1,500m, Steven Dubois is back on the podium in Beijing after winning bronze in yesterday’s 500m event. Dubois will have a chance to hit the cycle with a gold in the men’s 5,000m relay on Wednesday. It’s raining medals.

🥌 Curling: Team Jones was able to knock off a much-needed 7–3 win over Great Britain this morning in women’s round robin action. Next up: a chance to upset Team USA tomorrow at 8:05 p.m. ET. We’re sure they can hack it.