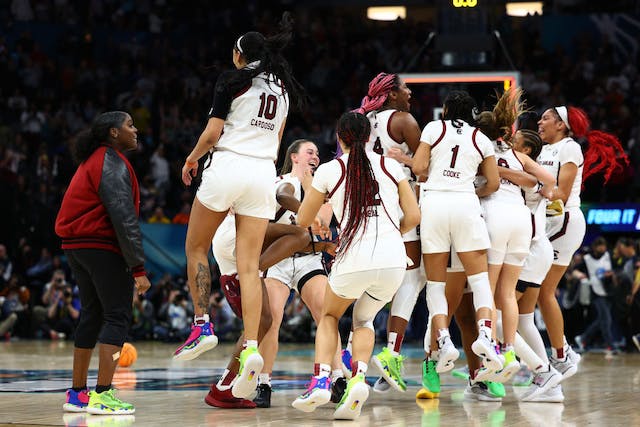 The GIST: After 19 straight weeks at No. 1, the South Carolina Gamecocks fulfilled their destiny last night, defeating No. 2 UConn 64–49 to win their second program national title. What a season.

Game recap: South Carolina got off to a red-hot start, limiting UConn to just eight points in the first quarter — the Huskies’ fewest points scored in a quarter all season. And while UConn made things interesting, pulling within six points in the third quarter, South Carolina dominated the entire game, especially on the boards, hauling in 21 offensive rebounds.

What’s next: South Carolina will (likely) lose Henderson and a handful of other key seniors to graduation (and the WNBA), but with Boston and legendary head coach Dawn Staley (now the only undefeated coach in national title games) still at the helm, the Gamecocks aren’t going anywhere.

Zooming out: Record-breaking viewership and attendance, upsets aplenty and a lot of fun along the way — the first women’s tourney under the March Madness branding was one for the books.