NFL playoffs: Are you not entertained?

The GIST: Four elimination games, four walk-off wins. Our jaws are still on the floor after an incredible weekend of NFL Divisional Round playoff action. 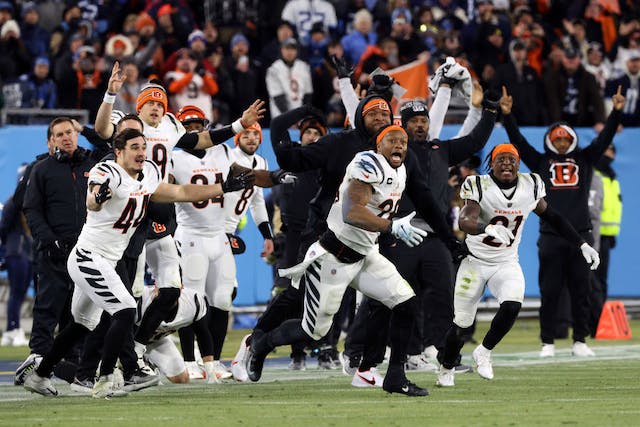 The GIST: Four elimination games, four walk-off wins. Our jaws are still on the floor after an incredible weekend of NFL Divisional Round playoff action.

AFC: On Saturday, led by rookie kicker Evan “Money Mac” McPherson and his next-level confidence, the No. 4 Cincinnati Bengals started things off by upsetting the top-seeded Tennessee Titans 19–16.

NFC: In another clutch kicking performance — this one from San Francisco 49er Robbie Gould, the Niners eliminated QB Aaron Rodgers and the No. 1 Green Bay Packers with a snowy 13–10 win, the biggest upset of the weekend.

Driving the conversation: Speaking of Brady, yesterday’s 329-yard performance could be his last. The GOAT is reportedly uncertain about playing next year and will take some time this offseason to make a decision. We pretend we do not see it.