After a couple days of men’s March Madness action, it’s time for the main event — the NCAA women’s Division I basketball tournament. Haven’t filled out your bracket yet? No worries, we’re here to help. Today’s Sunday Scroll is a deep dive into the tournament’s four regions, so give it a read and then make your picks before noon ET. 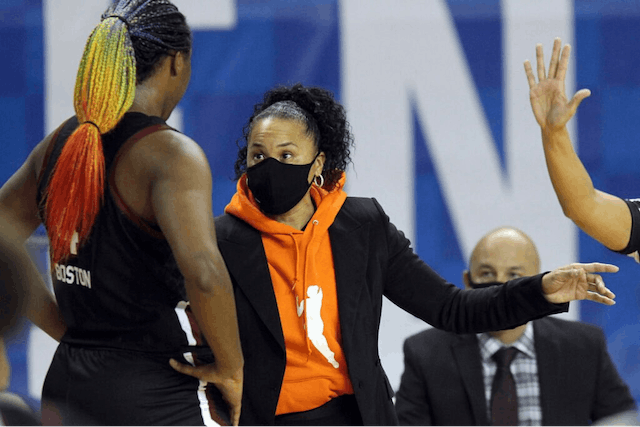 “I admit I get a little tense during this time of year. I’m more animated and more demanding of attention to detail. And Lord knows, don’t let me get the coffee with a shot of espresso. It is on.”

— South Carolina women’s basketball head coach and Hall of Fame player, Dawn Staley spilling the coffee on how she turns it up come tournament time. We feel you, Dawn.

First thing’s first. Before diving into the tournament and our regional breakdown,we want to paint a clear picture of the stage that is set for the women’s Madness in San Antonio, Texas.

Though some teams involved in the men's tournament have already started bending the rules regarding COVID-19 protocols, our hopes are for the women’s contest to make safety a little bit of a higher priority.

Moving on to amenities, the women’s tournament clearly differs from the men’s. After photos of the women’s “weight room” were shared on social media, several players throughout the WNBA and NBA called out the obvious differences compared to the men’s set-up.

The NCAA’s response to all of this? Messy. And after a lot of public pressure, updates to the weight room finally came yesterday. It’s 2021, do better.

Thankfully, the tournament set-up isn’t much different from the men’s. The 32 teams (31 this year due to a canceled Ivy League season) that win their Div I conference tournaments receive an automatic berth, and the rest of the slots are filled with teams chosen by a selection committee, giving a grand total of 64 teams.

Since the city of San Antonio is hosting the tournament, it’s broken up into four regions with location-appropriate names: Alamo, Hemisfair, River Walk and Mercado (how cute).

The region: We don’t want to get too ahead of ourselves, but the Alamo region is the toughest of the bunch. It also features two of the four 2021 Werner Ladder Naismith Women’s Coach of the Year Award finalists: Stanford’s Tara VanDerveer and Georgia’s Joni Taylor.

The favorites: It’s always hard to predict an upset, but we really don’t see any happening to the top three seeds in the Alamo. With a 25-2 regular season record (in the tough Pac-12 conference no less), No. 1 Stanford is the best team in the country.

The underdogs: We’re taking No. 11 seed South Dakota as our Alamo sleeper pick, since they had a solid 19-5 regular season and are coming into this tournament on a nine-game winning streak.

The region: If Alamo is the toughest region, River Walk is certainly a close second. With three first-team All-Americans, bitter rivalries and coaching firsts, this region is a must-watch.

The favorites: UConn is ranked second overall in the tournament and No. 1 in the River Walk region. While freshman Paige Bueckers (pronounced BECKERS) just earned All-American recognition to add to her accolades, she and the Huskies have a tough road ahead facing the region’s No. 2 Baylor and No. 3 Tennessee as potential match-ups later on.

Don’t sleep on them: No. 4 Kentucky and No. 5 Iowa can’t be ignored. Iowa’s Caitlin Clark has given Bueckers a run for her money as top freshman this year, and coming from a competitive conference like the Big Ten, the Hawkeyes may dish out a few surprises.

The underdogs: The No. 11 Florida Gulf Coast (FGCU) squad is coming from “Dunk City,” so we’re ready for them to put on a show against No. 6 Michigan. And after Naz Hilomon dropped 50 points (!!!) in Michigan’s battle against Ohio State earlier this season, it’s certainly going to be a match-up to watch.

🎟 No free rides in Hemisfair

The region: According to ESPN Stats & Info, the Hemisfair region is the third most likely to produce the NCAA champions. But crunching numbers doesn’t always offer a clear picture of what to expect. Anything goes in March, don’t sleep on Hemisfair.

The favorites: With AP All-American and arguably the best defender in the country in Aliyah Boston on the court, and the aforementioned Staley leading from the sideline, it’s no surprise that South Carolina has the No. 1 seed.

The underdogs: We’re keeping a close eye on No. 12 Stephen F. Austin. The Ladyjacks (really, again?) only dropped two games this season. Not to mention, they’ll be playing somewhat close to home, which could give them the edge they need to blow past No. 5 Georgia Tech tonight.

The region: Remember that Women’s Coach of the Year Award we mentioned earlier? Well, the other two finalists are in the Mercado region: Texas A&M’s Gary Blair and North Carolina State’s Wes Moore. No walk in the park here.

The favorites: NC State are the top seed in Mercado, thanks to the team's first back-to-back ACC tournament championship. They have future WNBA star and ACC tournament MVP Elissa Cunane at the helm, but they also have a giant obstacle on their path to victory...

The underdogs: It’s hard to call a third-ranked team an underdog, but thanks to the big shadow cast by NC State and Texas A&M, Arizona is flying under the radar. With one of the best seniors in the country in Aari McDonald (who was named Pac-12 Player of the Year and Co-Defensive Player of the Year), they have a great chance at seeing Final Four action.