"I’m working for the next generation who wants to play at the top level and should see that pay gap closed is important." 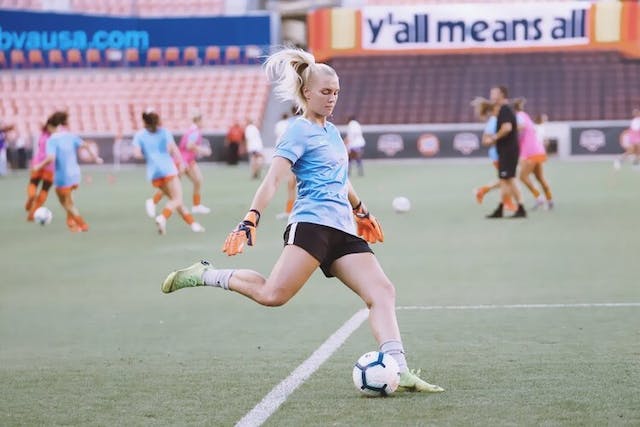 Devon Kerr is, in short, a powerhouse. Devon is a dual-citizen who just wrapped up her rookie season in the National Women’s Soccer League (NWSL) with the Houston Dash. When she’s not making saves for Houston (oh yeah, she’s a goalkeeper!), this 22-year-old is heavily involved in that equal pay fight, and making the sport better for generations to come.

Let’s get to our interview with Devon:

Lexie, at The GIST (TG): Okay, were you always a goalkeeper, or did you decide later on that you were just super cool with soccer balls being kicked at your face?

Devon Kerr (DK): *Devon chuckles* I was 10 or 11 and our goalkeeper got hurt and I was the only player who raised my hand willing to go in. I was saying “I’ll do it! I’ll do it.” My mom and coach both realized that most kids would have a sense of fear, and I didn’t seem to have that. So it was kind of a lightbulb moment for them thinking, “she doesn’t seem to get scared of a cleat or soccer ball coming at her face.” I loved it and adapted quickly. My parents got me proper training. And I absolutely loved it from then on.

TG: Oh my gosh. That must have been kind of wild for your mom to have that realization about your lack of fear…

DK: Oh yeah! My mom used to get very stressed out and then she realized it’s fine. I wasn’t getting hurt. I was good. So, she’s supportive.

TG: Thank you, mom! This past season was your first in the NWSL with the Houston Dash. What was that transition like going from playing at The Ohio State University to playing professionally?

DK: I think that was one of the biggest changes of my life. The speed of play in the game and how fast it is, that was a huge transition I had to learn to adapt to pretty quickly. Playing professionally, where you’re constantly surrounded by the best of the best, it is so fast-paced. And no one is going to give you any room for excuses just because it’s your rookie year —it’s professional soccer!

But we had a great coach and support staff that really helped me and other players transition. It makes a huge difference. We also had a really positive, competitive environment with a lot of veterans, like Rachel Daly (of the England national team), that welcomed rookies with open arms.

So now, because my rookie year just ended, I feel I’ve adjusted, and I would definitely tell girls in college to be ready and train in the off-season for a faster pace. The game is very quick, and a lot smarter.

TG: What does the off-season look like for most players? Do most go home, or stay in Houston and train?

DK: With Houston, a lot of our players went home. I’m back in Barrie, Ontario. There are a few that stayed there, but mostly players go back to their hometowns to live and train. After an almost eight month season, just being home around family and friends is what a lot of players need. There are some players that go play in Australia just to continue to play as their season is just about to start and the timing lines up with our off-season perfectly. I’m interested in doing that in the future.

TG: It is an incredible time in women’s soccer with all of the momentum and this sort of post-World Cup effect. What’s it like to be a part of?

DK: It’s pretty cool to be in the middle of this. It’s not where it should completely be yet, but seeing how much change has already happened in such a short amount of time is really promising. In college, I had goals to play in the NWSL and, at the time, the salaries were only $5,000 per season. That’s incredibly low and no one can live on that.

So, to see how much the salary has increased in just a couple of years is incredible. (Editor’s note: As of this most recent season, the minimum player salary was US$16,538 and the maximum was US$46,200). It’s not where we want it to be yet, but seeing the changes, and the recognition that’s coming, it makes me excited. The U.S. national team is helping a ton.

Plus, FIFA is putting $1 billion into women’s soccer, so that alone is helping to close the pay gap between women and men on an international stage (Editor’s note: FIFA’s $1 billion commitment is still a bit vague in terms of how it will be distributed to grow the game, but it is still promising nonetheless). And hopefully that will trickle down and affect other professional teams in North America and beyond. It’s a really exciting thing to be a part of playing during this time of growth.

TG: SO exciting. Growing up you had a dream of playing professionally, but now you’re not just a player, but also part of something so much bigger than the game. What does that mean to you personally?

DK: To me, there’s a real sense of pride in knowing that I’m helping and advocating for equality and recognition for generations to come.

I might not directly be affected or reap all the benefits during my playing career, but knowing I’m working for the next generation who wants to play at the top level and should see that pay gap closed is important.

I’ve wanted to play professional soccer my whole life and it’s coming to fruition. Now, my generation has a good chance of making a huge difference for generations of athletes to come. Knowing that women’s sport is going to survive and grow for a very long time because of my teammates’ actions and so many others…that’s the best feeling.

DK: I would definitely say both my mom and dad. I know that's two people, but my parents have both sacrificed so many things in order to help me live out my dreams, and they have taught me so many invaluable skills that I am seriously so grateful for. Having two amazingly powerful presences for me growing up, and watching them be successful, has helped me shape my strength as a woman. They have truly helped create this strong woman I feel like I am today.

TG: That was great, Devon. Now, let’s end on some rapid-fire questions!

TG: Who’s your guilty pleasure to follow on social media?

DK: Sydney Leroux Dwyer. It’s not really a guilty pleasure because she’s awesome and a fellow soccer player who gets it. But I just love the funny videos she posts on Instagram.

TG: What are you binge watching right now?

DK: I’m upset about this now, because I can’t stream it here (reminder: Devon’s in Barrie, ON right now) like I could in the U.S, but American Horror Story. It’s super gross. I love gory TV shows. So, now I’m watching Riverdale...again.

TG: What movie can you quote the best? Can you give me a quote?

DK: Bridesmaids, hands down! “There’s a colonial woman on the wing! There is something they’re not telling us! She was churning butter!”

Also, that scene when she’s on the plane and says, “Oh, you doooo?” I always say that to my mom. She loves it. *Devon laughs*

TG: If you could invite any three people to dinner, who would it be?

DK: Serena Williams would be number one for sure. Billie Jean King.  And honestly, Leonardo DiCaprio! He’s also been really involved with environmental change which would be cool to talk to him about.

TG: If you could have any soccer player in the history of the sport on your team... who would it be?

DK: I would probably say Marta. I got to play against her this year when we played Orlando Pride which was very cool. Seeing her in person was awesome. All of the accolades, respect… and the passion she exerts. And the honesty. We need more of her.

DK: Ooooh Bend It Like Bendham for sure. I’ve seen it so many times.