"As female athletes, we’ve had to deal with negativity for a long time. We don’t even really pay attention to it anymore. When you’re pushing for growth, there will always be people not on board, and trying to pull you down." 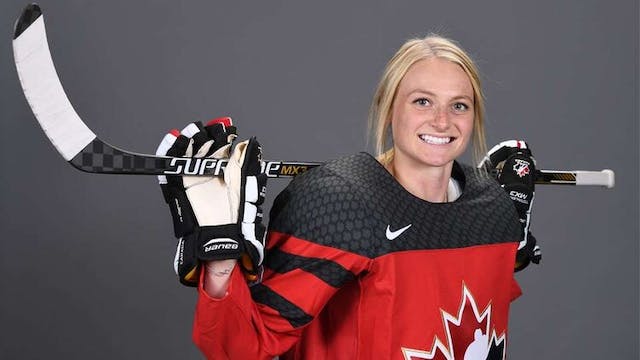 Hands down, Renata Fast is one of Canada’s best hockey players: she’s an Olympic silver-medallist, an NCAA national champion with Clarkson University, and a two-time Canadian Women’s Hockey League (CWHL, which shut down in May 2019) All-Star.

When she isn’t being one of the fittest and fastest hockey players in the world, this 25-year-old is catching up on rest, scrolling through Instagram (a classic millennial move), and doing her part to grow women’s hockey. Renata will be playing this weekend at the Dream Gap Tour’s Chicago stop, and you can watch along live on PWHPA's YouTube or through the CBC Gem App.

This week, we’re doing something new. We’re going to start off our interview with Renata with rapid-fire questions and then go from there. Let’s get to it.

Lexie, at The GIST (TG): Okay, first off, who’s winning the Stanley Cup this year?

TG: The Tokyo 2020 Summer Olympics are coming up…which athletes or teams are you most looking forward to watching?

RF: Oooh...I love watching beach volleyball. You have to be so athletic and it’s so fun. Plus our Canadians’ Melissa Humana-Paredes (GIST athlete ambassador alert!) and Sarah Pavan are really good. 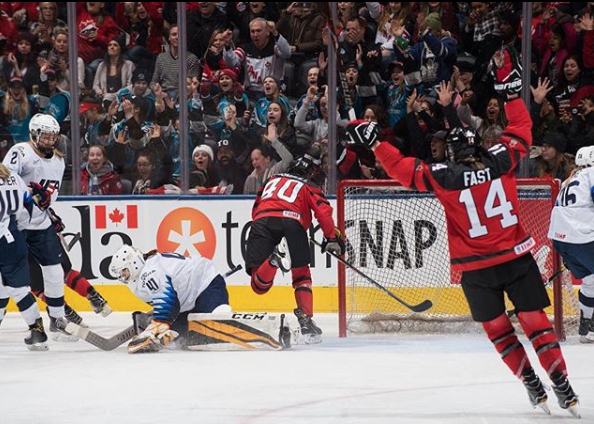 TG: Who’s your favourite Team Canada teammate to room with on the road?

RF: Hmm. Geneviève Lacasse is really fun. She always has something to say *Renata laughs.* She might prank you though so you always have to watch out for that.

RF: Full body circuit cardio, not too heavy of weights… just something to get the lungs going and a good sweat.

TG: … and your least favourite workout?

TG: Which Harry Potter house are you in?

RF: Hogwarts, for sure…

RF: OH MY GOSH!!! I meant Gryffindor! That’s so embarrassing. I knew something wasn’t right as soon as I said it! So embarrassed. Also, my brother tells me I’m in Hufflepuff but he’s wrong... (Editor’s note: Sounds like something a Hufflepuff would say, but okay!) 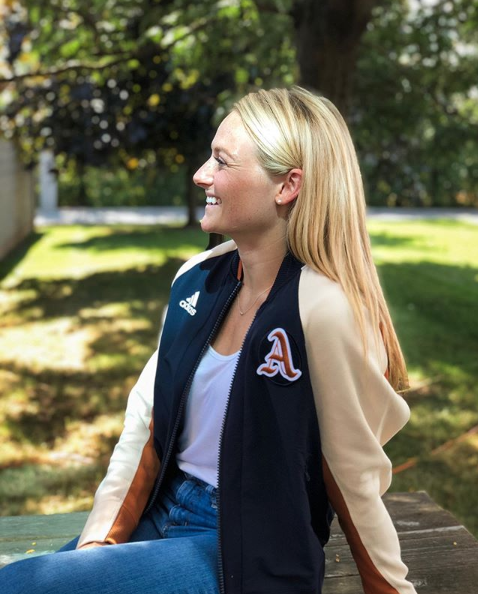 TG: How has it been adjusting to a new schedule with the Professional Women’s Hockey Players Association (PWHPA), and not having many games on weekends unlike previously with the CWHL?  (Editor’s note: Except this weekend, as Renata will be playing with the PWHPA in Chicago!)

RF: Oh my gosh, yeah, the weirdest part is definitely having free weekends…I haven’t had weekends off in forever. With the PWHPA, we practice on Tuesdays and Wednesdays, and we practice with the Canadian national team on Mondays, Wednesdays, and Fridays. And Hockey Canada brings us in for camps or mini-series against the U.S. teams during weekdays, as well. So it’s definitely still really busy.

On weekends, I’ve been doing some appearances and events, but because my weeks are still really busy I mostly just try to take advantage of having time to rest. And I can actually see my (non-hockey) friends for the first time in...ever, which is really awesome and a cool part of being back on a somewhat normal schedule.

(Editor’s note: Many female hockey players, and a lot of female athletes, complement their stipend from government funding aka carding with personal sponsorships, appearances, speaking engagements, and running youth camps.)

TG: Okay so, have you always been such a friggin’ fast skater and basically one of the world’s fittest human beings? (Editor’s note: Puns aside, Renata Fast is recognized as one of the fastest skaters in the game!)

RF: *Renata laughs* Okay, skating has always been my strength, yeah. When I was young, I would just skate myself out of trouble instead of working on, say, my stickhandling *Renata chuckles.* Now, obviously, I work on everything because everyone else at this level is a great skater, too. But, I was always a multi-sport athlete, and loved playing soccer growing up. My parents always say they never caught me around the house without a ball or not playing a sport growing up. And my parents were always great and encouraging, they put me in every sport I wanted to play.

I’m a huge advocate for multi-sport athletes. I wouldn’t have the success I’ve had without being involved in multiple sports. So many kids are overdoing it now and burning out from their sport so young. And, for injury prevention, I think it’s important to play different sports. I’ve been fortunate in my career so far that I haven’t had any major injuries and I know a lot of that stems from a young age, always doing so many different movements instead of too many of one movement. The position your body is in while playing hockey, just as one example, isn’t really natural. So, if you’re always just putting your body in one unnatural position, the chances of injury are even higher. 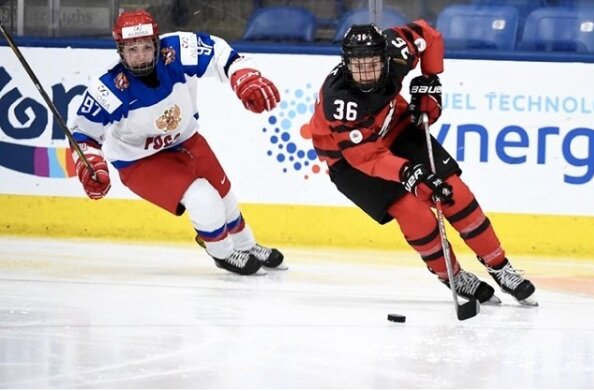 TG: Very very true. Okay, you’re a very even-keeled, nice and kind person, but on the ice you tap into a pretty, well, fiery nature, to say it nicely. What gets you fired up?

RF: *Renata laughs* I’d say…hmm… well two things. One, when people play dirty. I know I’m a tough player to play against because I am rough, but I dont think I’m dirty, though I know people might say otherwise, but I just play hard and physical. So, I get fired up when others slash or do sneaky things behind the play. So it just makes me go, “WHAT in the world are you doing?” Oh, and the second is when refs have terrible calls...that’s happened a lot over the years. *Renata chuckles*

And, off the ice, I get fired up when people are rude.

TG: Speaking of negativity, have you experienced a lot more of that lately with the #ForTheGame movement?

As female athletes, we’ve had to deal with negativity for a long time. We don’t even really pay attention to it anymore. When you’re pushing for growth, there will always be people not on board, and trying to pull you down.

But, collectively with #ForTheGame and the PWHPA, there are 200 of us, so we have a good support system. We’re all living the day-to-day life of trying to be professional athletes, so people being negative who don’t know what we’re going through and don’t know the barriers we are facing to be professional athletes, they don’t matter. We believe in ourselves and know where the game can get to, so we turn a blind eye to those who aren’t on board.

TG: There has been a lot of talk about funding for women’s national programs (in the last two years, both the U.S. and Swedish teams separately boycotted their governing bodies). What is the funding and relationship like with your team and Hockey Canada?

RF: I think we’re very fortunate to have a solid relationship with the management of Hockey Canada. They’re very supportive of the women’s game, so any time our players have approached Hockey Canada about our wants, or about what needs to change, they’ve been super receptive and have tried their hardest to accommodate us. We’re fortunate that they’ve been very reasonable and they treat us well.  Similarly with what we’re doing with #ForTheGame, we’re all behind the U.S. and Swedish women because equality is important. We all hope they can grow their programs as well. It makes us all better. 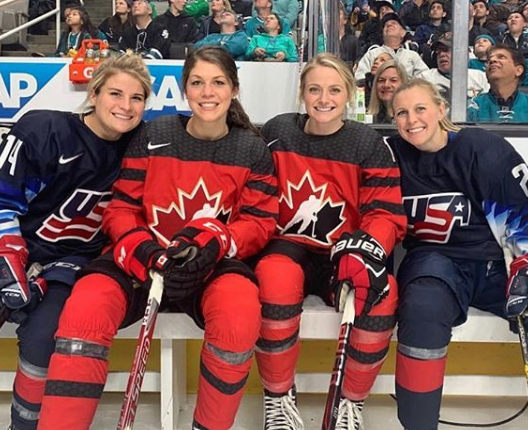 TG: Has this movement, and creation of the PWHPA, changed your relationship with players from other countries, specifically the U.S. women?

RF: It’s actually been a really cool experience to be united with some of our biggest rivals. I’ve always respected my opponents, especially Team USA. I never personally knew many of their players very well, but now through this movement, I’ve gotten to know them more. We’re all trying to push the game in the same direction. There are huge rivalries between us, but coming together is what needed to happen, and is what makes us so powerful. Now when we see each other it’s almost like a big family. We’re in this together. And also, as players on the Canadian national team, we have different opinions and perspectives as players from U.S.A. or from Finland. Or even those of us who played in the CWHL vs. NWHL. So we have a ton of different experiences in what we’ve dealt with, and what our background knowledge is in...knowing what’s worked, what hasn’t, what we need, etc. It’s been very cool to hear what Hilary Knight or Kendall Coyne-Schofield or so many other respected athletes have to say, and to see what everyone brings to the table.

TG: Yeah, that’s an awesome, powerful group of people you have together! Okay, now from the inspiring to the embarrassing. What’s your most embarrassing moment playing?

RF: At the World Championship this year, we were playing Russia, and it was the very first shift of the game. I got the puck behind our net, and I saw my team was going for a line change. Then, a Russian player pressured me and I hesitated. I was standing still and my ankles just sort of buckled and I dropped to my knees in front of the net. Geneviève Lacasse (goalie) came over and covered the puck and said “okay I got it. It’s okay…” (Editor’s note: Renata is laughing pretty hard at herself here) But the funniest part...ah...I was so embarrassed coming to the bench thinking, “What’s the coach going to say to me? I was supposed to start the game and set the tone for us…” so I was skating to the bench pretty mad at myself, and I looked up and all of the coaches and players were just laughing, so I started laughing, too. Now, it’s pretty funny in hindsight.

And that’s that on GIST athlete ambassador Renata Fast. Tune in this weekend to catch her and the PWHPA on their Chicago stop of the Dream Gap tour. Then, see her live in Halifax in March 2020 for the Women’s World Championship. 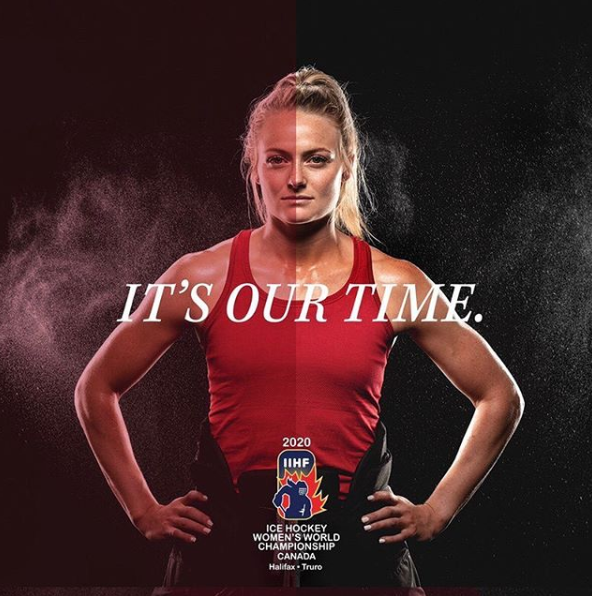