On June 24th, Sky Blue FC's Mallory Pugh broke the news to Emily Mason of Hunterdon Central Regional High School that she is the 2019-20 Gatorade National Girls Soccer Player of the Year. The Gatorade Player of the Year award is the most prestigious award in high school sports because it recognizes the nation's most elite high school athletes for their accomplishments on and off the field. 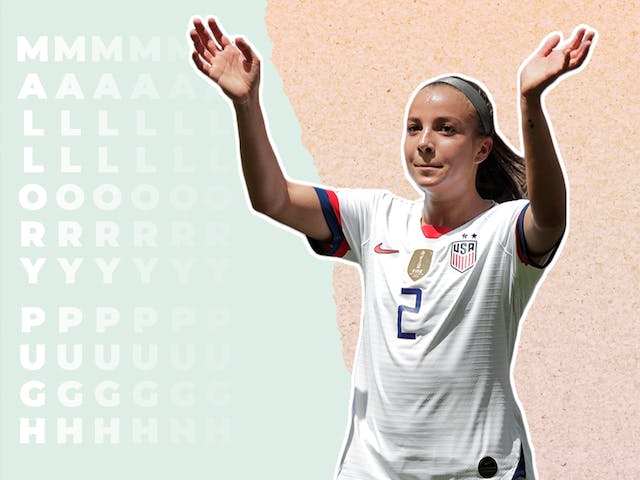 On June 24th, Sky Blue FC's Mallory Pugh broke the news to Emily Mason of Hunterdon Central Regional High School that she is the 2019-20 Gatorade National Girls Soccer Player of the Year.

The Gatorade Player of the Year award is the most prestigious award in high school sports because it recognizes the nation's most elite high school athletes for their accomplishments on and off the field.

Pugh, who won a gold medal with the USWNT at the FIFA World Cup in 2019 and is a star player in the NWSL was honored with the same award back in 2015. After she surprised Mason with the honors, we caught up with Pugh on how things have come full circle, discussed her professional career, and where she'd like to see the women's game grow.

Listen to the interview here.

Carrie: As a former Gatorade National Soccer Player of the Year award winner, what was it like for you being able to break the news to Emily this morning?

Carrie: That's amazing. It's definitely a full circle moment. Going back to 2015 when you won the award. What was it like for you winning such a prestigious award?

Mallory Pugh: I think it really just goes to show how much hard work and dedication that each of us athletes puts in, both on the field and off the field. And I really think winning this award and seeing that my name is now going to be amongst LeBron and Peyton and all of the past Player of the Year winners, I think that it's really cool to see that your name is now with them and that you're a part of that family. So I think being able to do something like that, not only for my team, but also for my school, because I know my high school meant a lot for me. So I think being able to do that really meant a lot for me.

Carrie: Absolutely. And obviously, Emily, like most young soccer players, look up to players like you on the Women's National Team and now you're playing in the NWSL with New Jersey. What players did you look up to when you were growing up?

Mallory Pugh: I looked up to Mia Hamm, obviously, I feel like every soccer player looks up to her, but I always looked up to her. I've met her many times before, and still to this day, I still get giddy about it. I'm just like, oh my gosh, that's her, she's actually right there. So, yeah, I looked up to her. I looked up to Tobin [Heath] also. And now being able to play with Tobin, it's really awesome. And then I also looked up to Ronald Daniel, I think from more of a soccer standpoint of it. I just loved the way he played and the way he expressed himself on the field.

Carrie: Very cool. Let's flip the switch a little bit to your career. You ended up going to college only for a few months, and then you decided to go pro. What led you to that decision?

Mallory Pugh: Yeah, I really... So I wanted to go to college to just like experience it. And I feel like I needed to go to realize that I wanted to be a professional, and I was able to do that at that time. And I really, I knew my dreams and my goals, and I kept that in mind with that decision. I needed to be in an uncomfortable environment to be able to grow. So I think all those things really led to me leaving UCLA and going to Washington.

Carrie: Yeah, and I mean, it worked out for you. Playing with Washington, and then you won the World Cup with Team USA, which was absolutely phenomenal. I also feel like that title took women's football to a whole new level. What was it like being a part of that and the movement?

Mallory Pugh: I mean, it was amazing. I never ever thought that I would be a part of and leading a movement like this and I think it's really cool just to see, really how much women's football has taken off and how much growth, not only in the States, but over in Europe and around the world because of that World Cup, it's really just like taking off. And I obviously want it to continue to do that. I feel like as the national team and as leaders for this sport, it's our duty to continue to grow the game and create more opportunities for girls to be able to play professionally. So I just... I hope that as my career continues, I am able to do that.

Carrie: Absolutely. I feel like last summer's win was kind of just the tip of the iceberg for you guys. Where would you like to see women's football in five years from now?

Carrie: Absolutely. And, you know, when you look at the WNBA, how they're associated with the NBA and the new CBA agreement, is that kind of where you'd like to see the NWSL go as well?

Mallory Pugh: For sure. I definitely think that having support from the MLS can definitely [help]. Either it's the MLS or you can look at The Rein where Leone is supporting them, just having support from a bigger source can really help grow the game. I think there's more and more clubs getting onboard of that idea. And I think it's kind of cool just to see that there's a women's side and there's the men's side to one club. It's not just the men's side.

Carrie: For sure. And just focusing on the NWSL right now. It was announced yesterday that you won't be playing in the Challenge Cup due to a hip injury. How disappointed are you that you won't be making your debut for Sky Blue?

Mallory Pugh: I think it's very disappointing. Yeah, before the quarantine and everything happened, I found out that I hurt my hip. I have a torn labrum, and so I am recovering from that. I think it's obviously very upsetting that I won't be able to play for Sky Blue this year because I was really looking forward to it when I got traded this year. I was looking forward to a fresh start and just a change, and I'm very upset that I won't be able to play for them. But I know that I'll be able to support them. And that the best that I can do right now is just support them and give them my support and love from far away.

Carrie: Well, we can't wait to see you back on the pitch. I just have one more question - With everything going on right now, what are your thoughts on female athletes in their prime, like Maya Moore and Renee Montgomery of the WNBA, choosing to step back from their sports and take activist roles?

Mallory Pugh: I mean, I think it's awesome. I look up to Marta and I think just seeing people step back from the game and realizing that there is something much bigger going on in our country than just the game, I think it's more than just sports and stuff, I think it's really inspiring and it definitely has helped me to kind of be inspired to voice my opinion, too, and let others hear my voice. So I think it's definitely important if athletes have the platform to generate change, I think one hundred percent that they should. We're not just athletes we're people and citizens. We just have been given a platform to be able to speak and be role models and inspiration for other people