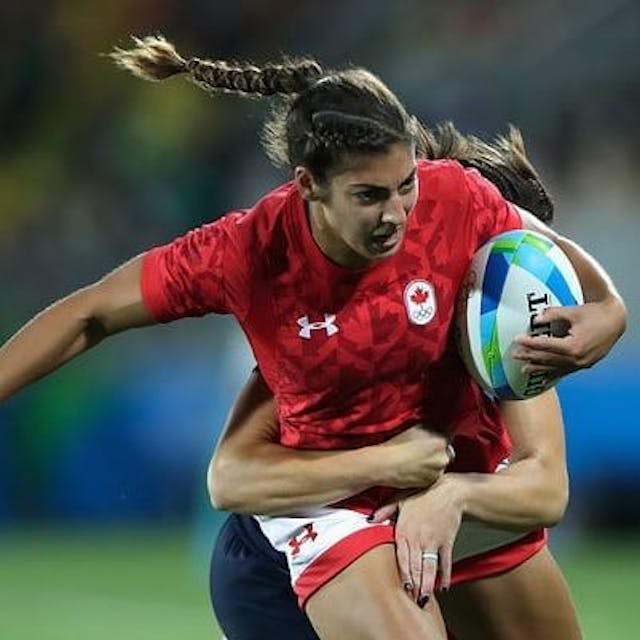 International Women’s Day is Friday March 8th. To celebrate, we’re featuring one bad @$$ female athlete for each of the four newsletters leading up to the special day. Why? Because female athletes only receive 4% of sports media coverage which we think (and we’re sure you do too) is absolutely ridiculous. So, as a women-led sports company, we want to help change that stat.

On top of their respective interview features, each athlete will be taking over our Instagram story (@thegistnews.ca) on the day their interview is released. So be sure to toss us a follow to get behind the scenes footage of the day-to-day lives of these amazing athletes.

So far, we’ve featured Georgia Simmerling, Liz Rose and Shelina Zadorsky. Last but not least? Canadian Rugby Sevens superstar, Bianca Farella. In 2013, Bianca won a silver medal at the Rugby Sevens World Cup and in 2016, she won a bronze medal at the 2016 Summer Olympics. Amazing. Let’s get into it with Bianca. 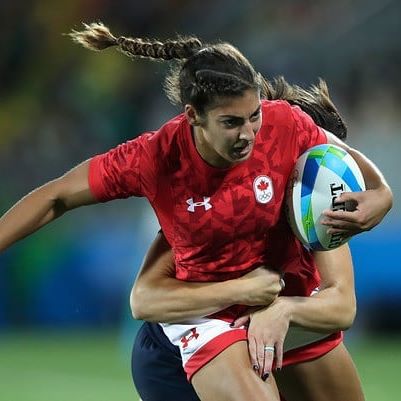 Ellen at The GIST (TG): In the same way a lot of people that think football is a “dangerous and physical game” people also think that rugby is too physical and especially think this for women. What do you say if/when people say that to you?

Bianca Farella (BF): Before getting into this question I should make the distinction between rugby sevens vs. traditional 15s rugby. Rugby sevens has grown so far away from the traditional 15s game, it’s almost like a different sport (ppsstt for more of an explanation click here).

When people say rugby is too physical of a sport for women to be playing is frustrating. The way I see it is that everyone has a body, and everyone has strengths that come with that body. And the way you choose to excel athletically is your choice or not (preach, baby!).

What I do best is playing rugby sevens because that’s how I like to control my body, and that’s my choice. I don’t think people should put boundaries on other people. I don’t see why people should be judging other people, it’s that person’s decision to use their body the way they want.

For me, I recognize there’s a timeline in playing such a physical sport. There are only so many years my body can handle playing the highest level of rugby. And that’s really what makes me tick. I want to live out my most athletic, prime years playing the sport I love. 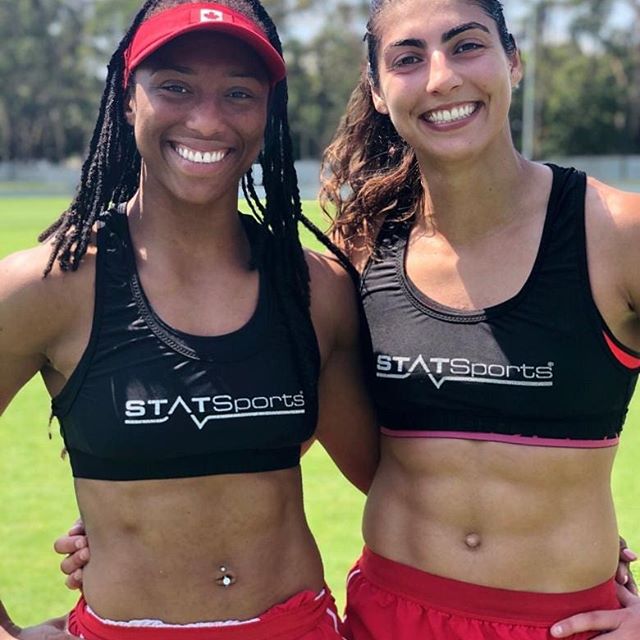 TG: You’re really young - only 26 and about to be 27 - how do handle the weight/pressure of representing your country?

BF: As much as I’m young, I’m already in my 7th season of playing rugby for Canada. My first tournament was back in 2012. Because I’ve been playing for Canada for a while now, I’ve learned what to expect at each tournament so my mental prep is pretty dialed in now.

The Olympics was the biggest mental and physical prep I’ve ever had to do because we didn’t know what to expect. Rio was the first time that rugby sevens was in the Olympics. It was a big deal! It was the hardest to prep for because it is really worth so much more. It’s the thing that our team is always training for. And on a more micro level it was a three-day tournament as opposed to the regular two-day so that changed our prep up a little bit up too.

Now that we’re on the road to Tokyo (they have to finish top four this season in the HSBC Rugby Sevens Series to gain a spot in the Olympics), it’s really helpful to have already gone through that Olympic experience, because the Olympics really do come with added pressure. As much as mental training should not change from tournament to tournament, sometimes it does.

TG: Speaking of the mental side of things, what is your mental prep before games?

BF: The night before a game I try to be as calm as possible. I’ll do things like watch a show, have some tea and get a good night’s rest. On game day, I listen to music. As a person, I generally run low. So music is a really great way for me to get pumped up. I generally listen to Top 40 or club music so that I can have that extra boost in order to get my energy up.

I really can’t afford to have a momentary lapse in physical or mental prep. The field is too big and the game is too short to make an error. In rugby sevens, there are only two seven minute halves with a two-minute break in between. You have to be completely dialed in the entire game. And what’s great is that I’m never nervous once the game starts.

Sevens is really a remarkable sport. It’s the same dimensions as a regular rugby field but has HALF the people on it. It’s crazy to see how much this sport has grown and how far the sport has come worldwide. It’s super cool to see how the sport is changing too. It’s such a different game now than it was when I first started and it’s going to just keep evolving. 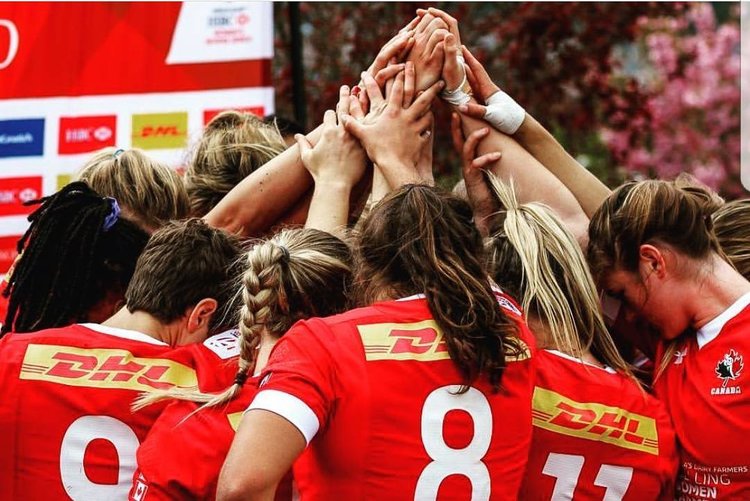 TG: I read somewhere that you’re one of the world’s best “finishers”. What does finishing mean in rugby and how are you the best?!

BF: People use the world finisher as a descriptor of someone who can finish off the play by scoring a try (Editor’s Note: A try is kind of like a touchdown in football). And it’s called a finisher because a try isn’t something that I can score alone. You need help from teammates in the middle of the field to start the play to help me get free so that I can score the try.

What’s awesome is that our Canadian team is a very technical and skilled team. I’d say we’re one of the most skilled teams in the world right now. On any given day, a huge part of the game is who is making the least amount of errors and from that, who is able to capitalize on the other team’s errors to come out on top.

Right now, I think the top three teams in the world (including Canada) are about 1% away from each other. It’s really tight competition. Rugby isn’t black and white so it’s about who can adapt best to those grey areas. 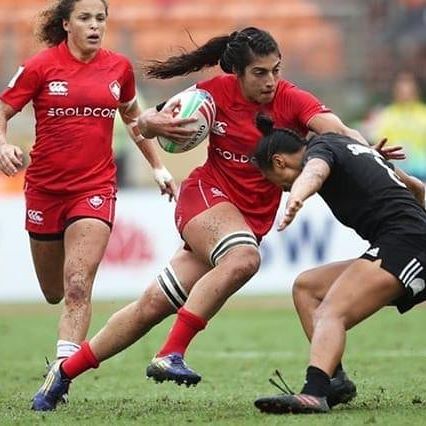 TG: As an elite athlete your body takes a toll, but also your mental health takes a toll. What was it like physically and mentally suffering a shoulder injury and recovering from it?

BF: Oh gosh, yes my most recent shoulder surgery was actually the second one for my shoulder. When you’re removed from sport when it’s not your choice it really gives you a different perspective on what you’re doing. The latest surgery and recovery really showed me how much I love rugby and inspired me to work really hard at recovery so that I could get back on the field to do what I love.

I’m also lucky because I enjoy training as much as I love playing the game. I really enjoy pushing my body to the limit. We often say in training that the girls in the rehab group are working harder than the girls in the regular group, because they just want to get back on the field so bad. Don’t get me wrong though, I still hate being injured.

Altogether, injuries really reaffirm your purpose of what you’re doing. As long as you work hard you know there’s a light at the end of the tunnel. Also, our medical and “return to play” staff are amazing. Now, although I’m wearing a brace, I feel like I’ve come back on the pitch feeling better than ever.

TG: Alright Bianca, to close things out we’re going to have some fun with some rapid fire questions. Here we go:

What’s something that you can’t live without?: Bread

What’s fave work out at the gym?: I love squatting, front squatting in particular

Who’s Your Favourite Rugby Player Ever? None actually. I guess it’s kind of weird, but I’ve never really had a favourite player that I looked up to. Maybe that’s because sevens is a relatively new form? I don’t know.

How many bones have you broken playing rugby? Three

Words/mantra you live by: Impress yourself 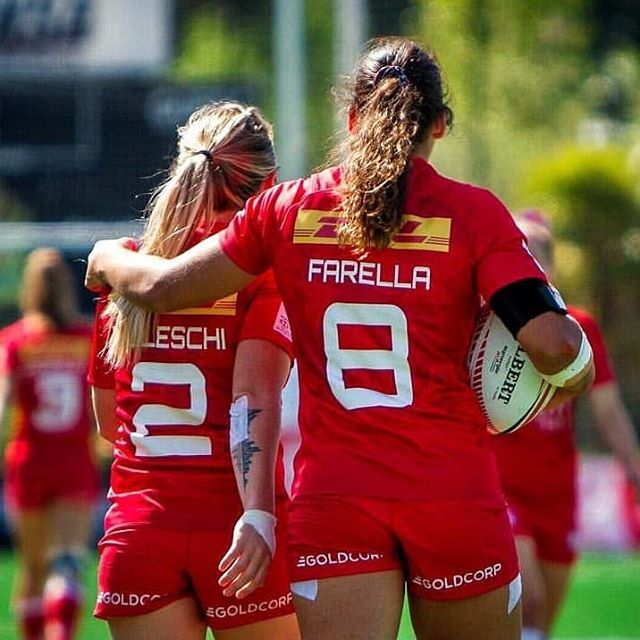