"The words “equal pay” and “equality” get thrown around interchangeably, but equality is a very complex issue, and it’s not just about getting paid equally — it’s marketing, support and investment." 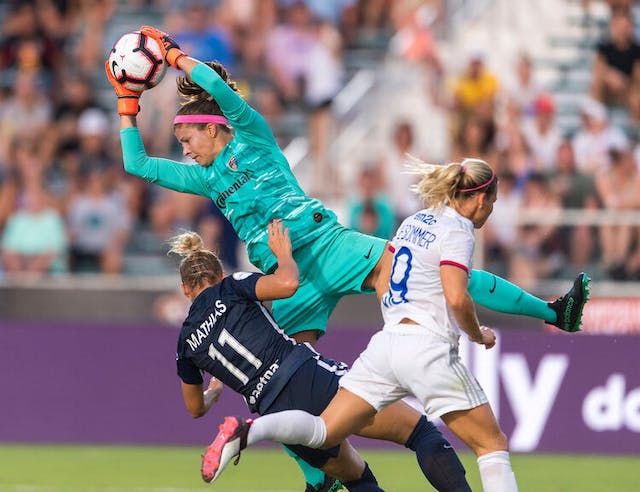 Stephanie Labbé is the goalkeeper for Canada’s national women’s soccer team, a 2019 National Women’s Soccer League (NWSL) champion, a 2016 Olympic bronze medalist, and an all-around incredibly driven and talented human. While Stephanie’s sights are set on bringing Canada home a medal at the Tokyo 2020 Olympics, she’s also keeping busy as a co-creator of Project Athlete along with her partner (another friend of The GIST) Georgia Simmerling. Let’s get to our interview with Stephanie:

Lexie, at The GIST (TG): Okay, you’re a goalkeeper! You could not pay us enough money to have shots fired at our heads. How did you get into that position?

Stephanie Labbé (SL): Growing up, I played lots of sports. My older brother played hockey, so I was always tagging along. I played hockey in the winter and soccer in the summer. But hockey is very time consuming. Then, by the time I was 12 years old, I was the only girl on my team, and had to start changing in my own locker room, so that was isolating.

Around the same time my friends from school said I should play indoor soccer. I couldn’t do both hockey and soccer though. But I totally loved indoor soccer, and had so much fun. So, in the summer I tried out for the rep team, and at the tryouts the coach asked if anyone would go in goal. There were about eight of us 12 year olds putting up our hands so we all rotated. Then, at the end of tryout, the coach asked how badly I wanted to be on the team, and if I was willing to be goalkeeper. I guess I was the least fearful of the ball. 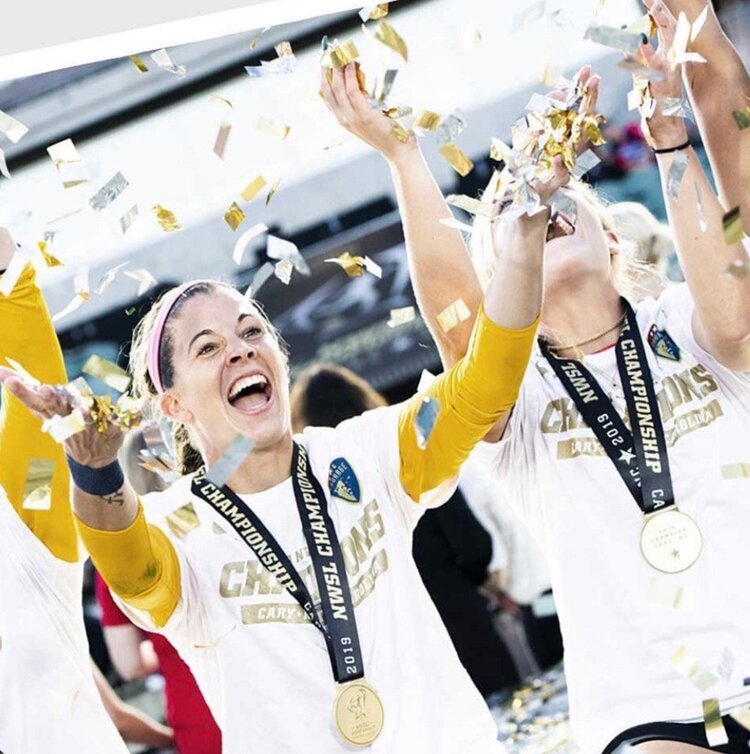 TG: And the rest is history. What did your parents think about that?

SL: Well, luckily growing up I played for a very good team. So, really just the extent of my mom’s nerves would be her leg kicking a lot as I played. The older I get, the better she is with her nerves. Now, she’s way more calm when I’m in net, and ironically she’s actually more nervous when our strikers are shooting during the game.

TG: That’s funny. Well, she definitely has a million reasons to feel calm about you in goal after seeing all the success you’ve had over the years…Do your own nerves ever affect you, or translate into weird soccer dreams?

SL: So, I actually never get to play soccer in my dreams. I do have recurring nightmares where I’m about to start a game and I don’t have a cleat or can’t find a glove, and something’s gone wrong. It’s probably why I am soooooo particular about checking my bag. *Steph chuckles*

TG: Reading your Player’s Tribune article, you talked about playing men’s soccer being a really mentally and physically challenging part of your career. Do you ever find it difficult to speak candidly about the differences in men’s versus women’s games without feeling like you’re giving fuel to the haters to hold against women?

SL: I have never had a hard time comparing the women’s game versus men’s game. People can say what they want to say. I’ve heard a lot of negative things, but to be honest I wouldn’t be where I am if I put a lot of thought into what people care about what I say. I don’t give a sh!t to be frank (Editor’s note: preach sister!). I know that not all men have a genetic, biological advantage, but on average, most do. I’m aware and recognize that. There are anomalies out there and women who can come overcome those. And what should stop you from pursuing any challenge? The risk is yours. I understand that every time I go out and play with men, or women, who are bigger, faster, stronger than me that I’m putting myself at risk. You can say that about anything in life.

If you’re going to live your life being scared of the negative things that can happen, then you aren’t going to go anywhere.

I always try to live optimistically. 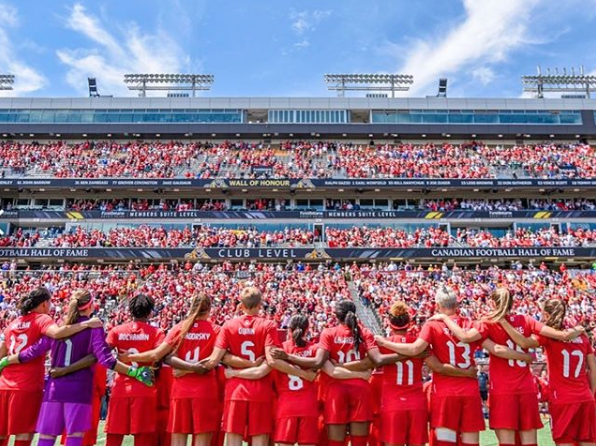 TG: Amazing! So, a huge story with women’s soccer has been what’s going on with the U.S. women’s team and the fight for equity. What is the relationship like pay equity-wise with the women’s program in Canada and with Canada Soccer?

SL: Unfortunately in Canada, it’s a bit untalked about in a sense. We, as a national team, have a fairly good relationship with Canada Soccer. Year over year, our talks and contracts get better and better, so it’s moving in a positive direction. But it’s still nowhere near where it should be.

The words “equal pay” and “equality” get thrown around interchangeably, but equality is a very complex issue, and it’s not just about getting paid equally — it’s marketing, support and investment.

You can see the direction it’s moving, but you also see Canada Soccer investing in a brand new professional league for men, while we’re the only national women’s program ranked in the top 10 in the world that doesn’t have our own domestic professional league (Editor’s note: As Canada is hosting the FIFA World Cup in 2026, they are required to have a domestic professional league). That is still so heartbreaking. We have proven time and time again, since 2012 when the team won Olympic bronze, that we are performing and getting results (Editor’s note: The Canadian women’s national team is currently ranked eighth in the world, while the men’s team is 73rd).

I think the successful future of this program is based on developing players in Canada. And, as of right now, we have to go abroad and get contracts to play soccer in other countries. It hurts our depth. We don’t have a league to give players the chance to grow and shine and prove they can play on the national team. Women stop playing after university because they can’t get a contract abroad, but if we had our own domestic league those players wouldn’t fall through the cracks because they’d have a place to play to develop.

So, it’s moving in a positive direction, but there is still a long way to go. It’s amazing the U.S. team is using their platform to talk about it and bring this subject to light. They’re talking, they’re acting, and they’re paving the way.

TG: That is so important and so candid. Wow. Thank you for that. Looking ahead, what is your vision for 2020?

SL: Post-Olympics is a blur and unknown. The immediate thing that comes to mind is that January is Olympic qualifying. And, for the Olympics, we want to bring back a better colour than bronze. And, secondly, because I don’t just play for Canada full-time, I’m also looking forward to playing with my pro team (North Carolina Courage) and trying to win a back-to-back national championship with them. 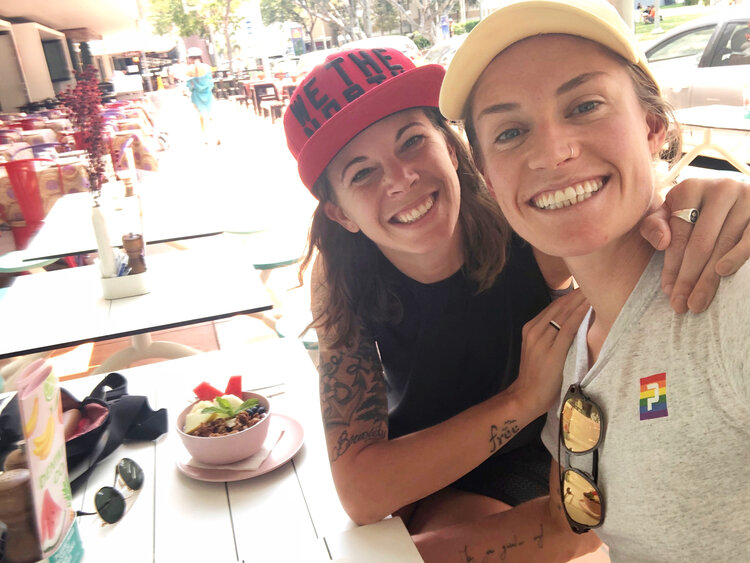 TG: If soccer had walk-out songs (like baseball), what would your song be?

SL: Oh my gosh. This is awesome. I want to say Cindy Lauper “Girls Just Want To Have Fun.”  Everyone would love it!

TG: Would you rather sing or act?

SL: I would love to have a great singing voice, but I’m terrible. AIso, I don’t know if the lifestyle of a singer would be what I want. So, actress.

TG: What is your favourite winter Olympic sport to watch?

SL: My gut is going to hockey. It’s such a passion of mine and part of mine and my family’s life. But I’ll be honest, after meeting Georgia, I really enjoy watching skiing and ski cross. It’s way more exciting for me when she is not racing, because then I am way less nervous. I got the chance to watch it live two years ago in the Alps. It was so fun and so much adrenaline. I have a short attention span so it caters to that.

TG: What is your favourite sports movie?

TG: What movie can you quote the best?

SL: Probably Billy Madison. “I got this shirt from Frank”... and Frank is written on the inside of it. I say it all the time. *Stephanie chuckles* 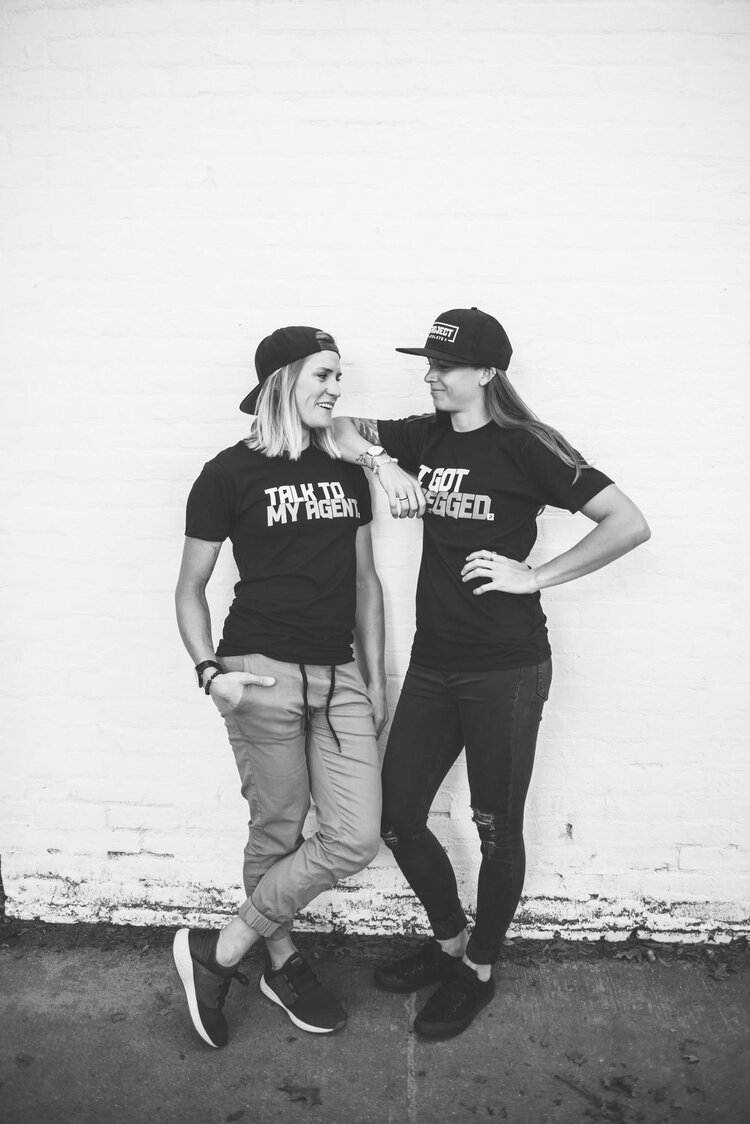