"I’m finding a way to have the best of both worlds. It’s okay to take the time you need as an athlete to do what you need to be the best and to recover, but still know that you can come home and be a mom and she’ll be waiting for you." 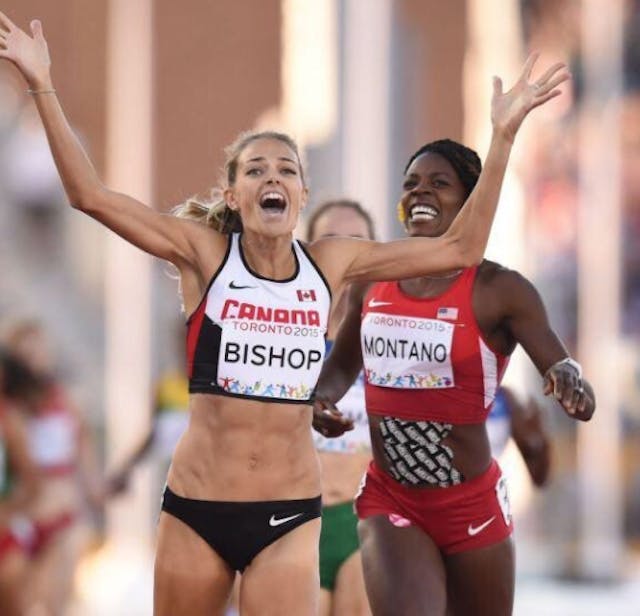 Melissa Bishop-Nriagu (pronounced “in-nree-ah-goo”) is a B-O-S-S boss. Melissa is the Canadian national record holder in the 800m and is preparing for her THIRD Olympics at Tokyo 2020. Melissa shut her season down early this year to address post-pregnancy related injuries (she had a baby in July 2018) but when this mama comes back, look out. Read more on what makes Melissa so badass, what motivates her, and what Lizzo song she’s getting down to at karaoke below.

Lexie, at The GIST (TG): Okay, so you shut down your season early this year to take care of your body and get ready for the Tokyo 2020 Summer Olympics. How has it been to step away?

Melissa Bishop-Nriagu (MB): I get time off every year but normally that comes after World Championship. The (2019 Doha) World Championship just ended this past weekend, so I really only ended my season a little earlier than usual. Still, it was really hard to watch it sitting at home. But, I’ve already started my 2020 campaign to get ready for Tokyo, and I’m feeling good, strong, healthy, trying to put weight on and I just have a fresh perspective. It’s kind of like a mini-holiday to step away and disconnect from the work world. 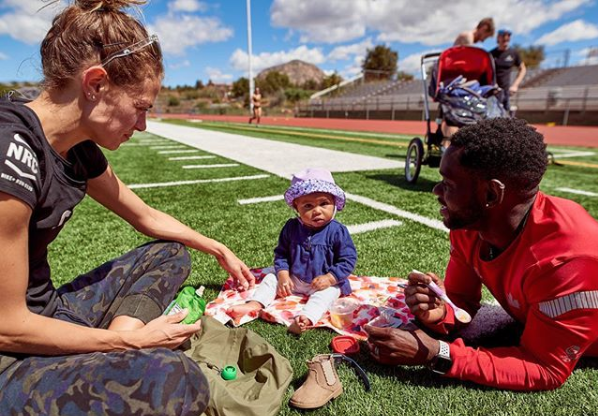 TG: It must be super tough to watch at home, but your mindset is great! Going back to the beginning, how did you first get into track?

MB: I remember in elementary school, I was always lining up to race the boys, and only one boy could beat me—he was super fast. That was a motivation. And when you’re good at something, it’s easy to like it, and that’s kind of how I found my way into track and field.

I had a talent with running, but I wasn’t a track and field athlete exclusively until university. I played competitive hockey, volleyball, basketball, and then it got to the point before going into Grade 12 my parents said, “Okay Melissa, it’s time to choose hockey or track and field, we can’t afford to keep doing both.” I was still able to play hockey during school, but had to give it up outside of that, and I took the track and field route. It definitely wasn’t easy and my dreams didn’t come true all at once though.

Even entering University (of Windsor) I always had a dream of going to the Olympics but it wasn’t until after I graduated university that my coach sat me down and said, “You have a great shot at making Olympic team, let’s figure this out.”

Up until then it was a dream. Then the last few years of university it turned into, “okay, this could become a reality” and it’s all manifested itself. I absolutely love my job.

TG: You obviously made the right choice because you’re crushing it, but why the 800m?

MB: So, I was a sprinter in the 200m and 400m in my early high school years. Then, my coach suggested I try the 800m and I hated it for a very long time. I grew to love it as I got better at it, and I’ve stuck with it ever since. Now, I just love it. It’s an event I’m still trying to figure out. It’s a challenge. Every race is a challenge obviously regardless of distance. But it’s two laps around the track so it’s like a sprint but with endurance...kind of the best of both worlds. 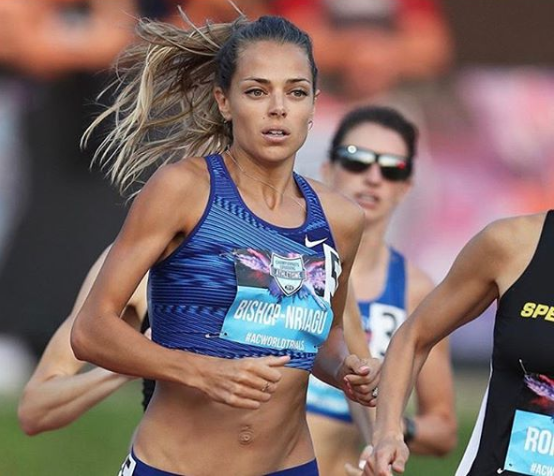 TG: Awesome. It must be super important to have a good support system to tackle the ups and downs of being an Olympian.

MB: Having support is huge. Especially for women in sport, too, because our challenges are taken to the next level. We aren’t offered the [financial] opportunities that our male counterparts are… You see the fight right now in women’s soccer, no equal pay. Women’s hockey, no equal pay. Track and field is individualized, so it’s different, and you don’t know anyone’s salaries. But knowing you have a support system makes a huge difference. And for me that includes my husband, coaches, family, trainers, therapists, sports psychologists, a lot of people.

MB: My mindset hasn’t changed. My goal is still to be on the podium. The goal was podium in Rio 2016 too, and I just missed it by one place. So my goal is still the same. But, I’ve been out for two seasons, so I’m looking forward to clawing my way back. I’m really looking forward to trying to keep a healthy body and get through a season and get a P.B. (aka personal best). There will be blips, but having a healthy season leading up that would be so great. I’ve really missed that.

TG: Amazing. What motivates you?

MB: It’s knowing that my competitors are out there and they’re training so hard every single day.

I don’t want to regret the run that I didn’t do.

In the end, the small things I fluff off will make the biggest difference come Tokyo. 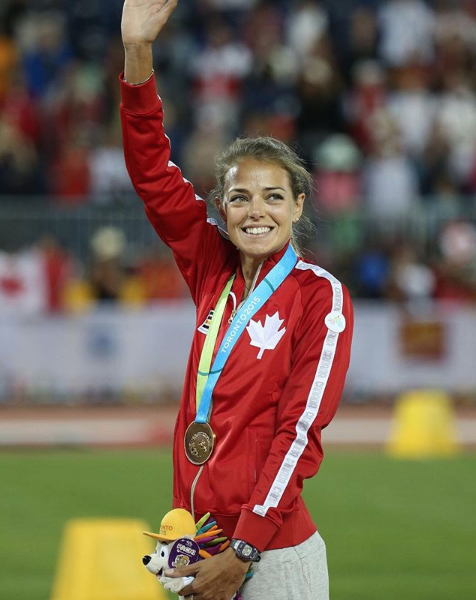 TG: That was a really great, pointed answer! What are you most proud of for overcoming in your life or athletic career?

MB: I think I’m in it right now. Coming back to full-time athletics after having Corinne is really something I’m still striving to do and overcome...and proving to the world that women can be moms and athletes at the same time. There are so many examples just in track and field alone where women have come back after having babies and made it to the podium in two years. So that’s it.

TG: So SO true! Obviously we’re rooting for you. What are the biggest ways your life as a professional athlete has changed since having Corinne?

MB: I’m still finding my way. It’s a hard balance that I’m learning. Last year was the test year of balancing full-time athletics and parenting. I’m finding a way to have the best of both worlds. It’s okay to take the time you need as an athlete to do what you need to be the best and to recover, but still know that you can come home and be a mom and she’ll be waiting for you. That’s been the hardest part has been finding that balance.

TG: The challenge of athletes becoming parents and being athletes has been a big topic of conversation lately. Is that something you were affected by?

MB: When we first found out I was pregnant, the top of my “uh-oh” list was, “what will my sponsors say?” The majority were all for it and couldn’t wait to see what I would do after pregnancy, but there was still this concern because there’s this stigma around having a baby and coming back to sports and that you can’t do it. But you can! We’ll get there shortly as a country, and with sponsors, to support women through their pregnancies and after. Because imagine taking a mat leave and finding out your job wasn’t there, which sadly still happens, but that’s kind of what it’s like as an athlete. Sponsors are our livelihood. And, having a baby coming into the world and knowing you may or may not have money coming in is scary as heck.

TG: That is super scary! Is it weird getting asked so many questions about being a parent now?

MB: It was weird in the beginning to be asked about it, but now it’s part of who I am! 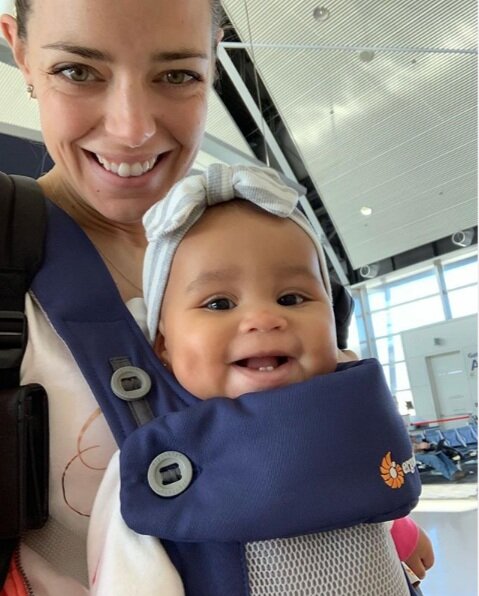 TG: This was so awesome Melissa. Thank you! Now, let’s end on some v. fun rapid-fire questions.

TG: If you’re celebrating a great race…what are you ordering first at a restaurant OR bar?

MB: A burger with all the toppings and french fries. We have this place in Windsor called Mamo Burger with this crazy array of burgers.

TG: What are you binge-watching right now?

TG: Wow. Good for you! You’re the first to respond with a book!

MB: Okay, you caught me in a good moment to say that. *Melissa laughs* So, as soon as baby goes down, 90 Day Fiancé comes on!

TG: Do you have one song you listen to before you run?

Okay, so, we’re not allowed any music in our call room where we get our spikes on and get organized and get our numbers…no headphones or anything. But I’m pretty open to whatever  music on the way there.

TG: What other sport or athlete are you most looking forward to watching in Tokyo?

MB: Cycling, swimming, diving… oh, gymnast Ellie Black! I got to know her recently. She is the epitome of down-to-earth. She’s just this pint-sized super strong athlete you want to root for!

TG: Okay, and finally,  how can someone get your abs?

MB: *Melissa chuckles* Well, a lot of running. And to be serious, I do core work and pilates has become my new core work, just, zipping everything back up. Pilates has been a killer but introducing something new other than sitting on a yoga mat and crunching has been good… and also, well, running! 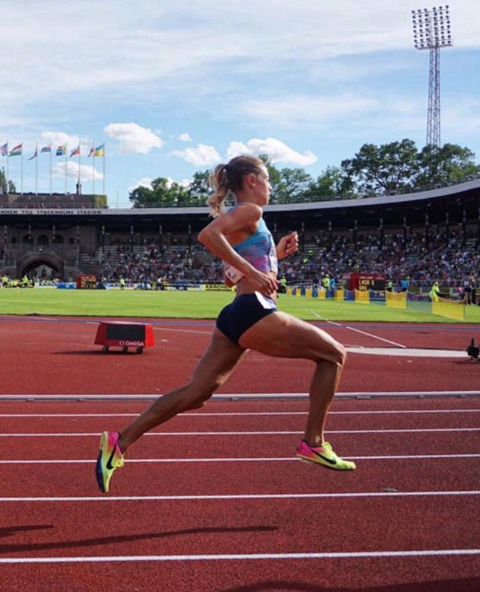 Want more from Melissa? Check out this episode of The GIST of It.