"Before I go on the ice I always tell myself to be unstoppable." 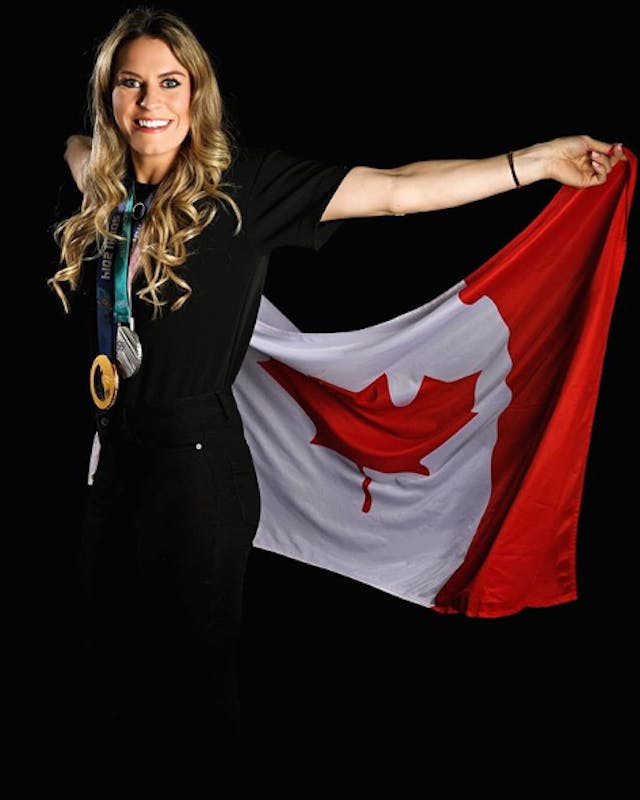 Natalie truly needs no introduction, but we’ll give her one anyway. She’s a two-time Olympic medalist, Clarkson Cup (the former Canadian Women’s Hockey League Championship trophy) champion, Amazing Race Canada runner-up, and now a competitor on CBC’s Battle of The Blades. In Natalie’s downtime…just kidding, she doesn’t have downtime. Natalie also runs a High Performance Hockey Academy for girls and works to inspire the next generation every damn day.

Let’s get to our interview with Natalie:

Lexie at The GIST (TG): You just played in your first Dream Gap Tour showcase games in Toronto. It looked very successful, what was that like to be a part of?

Natalie Spooner (NS): It was awesome! Going into it, I really wasn’t too sure what to expect. It came together quickly and there was no precedent for what we were doing. Also, we weren’t playing for a trophy, and it wasn’t a big playoff game, so I didn’t know what the level of intensity was going to be. But all four games were intense, fast, and close. And it was amazing to see all of the fans, and little girls, in the stands in our first showcase.

TG: Was was your favourite or most inspiring interaction from last week’s series?

NS: I saw this one little girl who was being interviewed, and she was holding a sign that said, “When can I dream of making a living playing hockey?” The fact that she was even thinking of that at such a young age was so inspiring, and she wasn’t even the only one. There were so many young girls with signs and messages. These young girls have a dream to have a career playing hockey, and we’re trying to help pave the path for them to do it.

TG: Is anyone getting paid on the Dream Gap Tour?

NS: No. Everyone is volunteering. Players, coaches, game day staff, organizers...everyone. (Editor’s note: despite the volunteering, the Professional Women’s Hockey Players Association (PWHPA) landed some great sponsors. Although the players aren’t paid to play, other aspects of the Dream Gap Tour are covered, including food, transportation, accommodation, ice time and some equipment. Baby steps)

TG: When the Canadian Women’s Hockey League (CWHL) officially folded in May, the National Women’s Hockey League (NWHL) was a potential option to play in. Instead, you and a group of the best 200 players in the world banned together to not play professional hockey in North America. Why did you opt into the #ForTheGame movement?

NS: There’s really not one specific answer.  When the CWHL folded, we were completely blindsided. Then we collected ourselves and tried to figure out the best way forward. So, as players, we all put our voices together, talked, heard each other out, and collectively made a decision. In women’s hockey, being paid a career wage has never been an option. So it was important for us, as people who believe in this sport, to use this opportunity to work toward something that was sustainable, with the resources we would need (Editor’s note: meaning work towards having a league that pays more than $2-15k annually and so that women don’t have to have another job in addition to playing hockey). We wanted to use this as a step toward building something so that young girls won’t have to be in this position we’re in now, 10 or 100 years from now. So, we pursued the unknown as one, united voice. Now, we’re really optimistic.

TG: As you should be! A lot of hockey players, like yourself, have always used your platforms to be positive, but with the #ForTheGame movement, it’s brought in a lot of negativity and, well, trolls. Does that affect you?

NS: No, I try not to let anything like that affect me and bring me down. I believe in the game, how great the players are, and how hard we work.

We work just as hard as any other athlete and deserve to have a league and place to showcase our talents. Everyone is going to have people who don’t agree with them when they stand up for something.

TG: That is a really good perspective to have. Okay, you’ve accomplished a lot in your career, but what’s something you’re personally really proud of?

NS: Before the Vancouver 2010 Olympics, I made it to Canada’s top 35 players, then was cut before centralization (aka didn’t make the team), and that was pretty disappointing. Honestly, it forced me to work harder, and showed me what I needed to do to get to another level to become an Olympian. So I’m proud of learning from that.

TG: Totally! Speaking of your High Performance Hockey Academy, what do you usually do or say to inspire young athletes beyond just teaching on-ice skills?

NS: Hockey has the ability to teach you a lot of skills: working hard, overcoming adversity, learning teamwork, communication…but none of that is going to feel rewarding if it’s not fun. Hockey is a game, and you’re supposed to be enjoying it. So, to keep more young athletes, especially girls, in sports, it needs to be enjoyable.

Also, we’re now seeing a lot of kids playing only one sport all year long, and they are naturally getting worn out. I think it’s important that kids play multiple sports and mix things up, so that when they come back to hockey and it’s time to work, they’re fully into it. If we teach kids to have fun and enjoy playing sports while working hard, that’s when they’ll get the most out of it and play their best.

TG: Growing up, you had so many role models of your own, but now you’ve become a role model for so many. At every game, fans are wearing your jerseys. People are lined up to meet you. What’s that like?

NS: Honestly, it’s still weird. *Natalie chuckles*  I just feel like a regular person and just try to be myself. It’s definitely weird, but I just try to do the right thing that sends the right message for kids to look up to. I was fortunate to have some role models growing up who did that for me.

When I was little, I had the opportunity to meet Jennifer Botterill and that was really a turning point for me that sparked my dream, so to think I could be that for another little girl is… well, it’s pretty craz

TG: That’s really awesome. You’re competing on Battle of the Blades as a figure skater, while still training and playing hockey. What has it been like transitioning between the two sports?

NS: It is really tough! At first, with the toe picks, I fell...a lot. My elbows are still bruised from falling. So the transition between the two has been pretty hard. When I go back to playing hockey, I feel like I have no edges. And then I go back to figure skating, I get in trouble because my tendency is to get low, so I’m always being told, “more upright!”

I think figure skaters are amazing skaters, though. The way they carry the weight and feel their edges. As hockey players, we’re focused on being fast and powerful and just getting our job done. We never worry about looking pretty or pointing our toes. In figure skating, you have to work to look effortless and graceful.

TG: What is that like as a hockey player to now always be conscientious of how you look while skating?

NS: It’s really weird! At first, I wouldn’t smile, I wasn’t thinking about any of that. Now the more I do it, the more I get used to it. Figure skating is actually a lot of fun, and I have a lot of respect for it.

Editor’s note: You can watch Natalie compete on CBC’s Battle of the Blades Thursdays at 8pm ET, then vote for her at cbc.ca/battlevote

TG: You’ve been involved with Hockey Helps The Homeless (HHTH) for a few years, can you talk a bit about them and why it’s important to you?

NS: Absolutely! I think it was my first year in the CWHL in 2012 when I started helping with HHTH events. It’s a really important cause — their goal is to raise awareness and financial support for homelessness. I was really fortunate with the environment and the home I grew up in, but there are many people at-risk or homeless that could use help. So it’s great to be part of something important, and the events are just really well-run. Anyone can play, and you get to play with professional female players and ex-NHL players. You’re treated like a professional from the moment you walk in the door with the treatment you get. Jerseys, socks, it’s all provided.

Anyone can sign up, either as an individual, or as a team, and you just need to fundraise a certain amount of money. There are tournaments all over Canada. It’s a really awesome event.

Editor’s note: If you’re interested in learning more about Hockey Helps The Homeless or getting involved, check out their website.

TG: What are you binge watching right now?

NS: *Natalie laughs* I honestly don’t have time right now! But before I got super busy, I was watching Bachelor In Paradise. I didn’t get to finish it, but I watched the spoilers, so I’m good. Oh, and I love 90 Day Fiancé!

TG: Was your love for 90 Day Fiancé inspired by your recent engagement?

TG: You love singing! What’s your favourite song to sing?

NS: Celine Dion, “My Heart Will Go On”

TG: Audacious, we like it. You can invite any three people to dinner. Who are you inviting, and what are you eating?

NS: Oh, gosh! Okay for sure my grandma. She loved singing, too. The Queen! And I would invite…Ellen (DeGeneres...not The GIST’s Ellen lol). We’d eat The Keg’s Bleu Cheese Fillet.

TG: What movie can you quote the best?

TG: What summer sport are you most looking forward to watching at Tokyo 2020?

NS: I used to swim, so I really like watching swimming. But I’m excited for surfing to be an Olympic sport. That will be cool to watch.

NS: Chocolate covered almonds. Hands down. (Editor’s note: Natalie confidently answered what her guilty pleasure is before the question was fully asked)

TG: Do you have a motto or mantra?

NS: Before I go on the ice I always tell myself to be unstoppable.