"It’s all about getting to know yourself as a player and figuring out what you need to make your mental game strong. When you’re putting in the work, you’re building the confidence to go out and proudly represent your country." 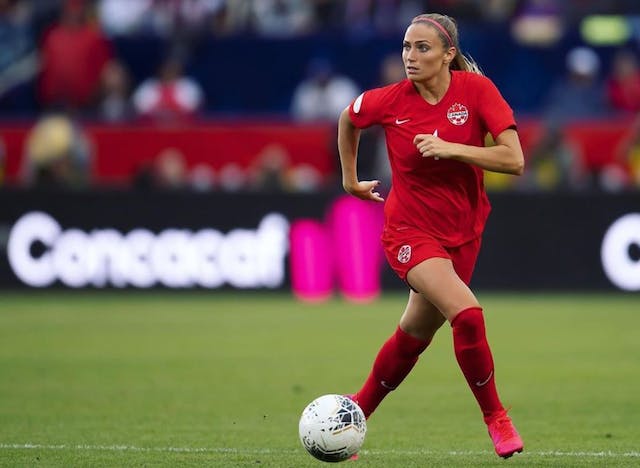 International Women’s Day is this Friday March 8th. To celebrate, we’re featuring one bad @$$ female athlete for each of the four newsletters leading up to the special day. Why? Because female athletes only receive 4% of sports media coverage and only 0.4% of all endorsement money which we think (and we’re sure you do too) is absolutely ridiculous. So, as a women-led sports company, we want to help change these stats.

On top of their respective interview features, each athlete will be taking over our Instagram story (@thegistnews.ca) on the day their interview is released. So be sure to toss us a follow to get behind the scenes footage of the day-to-day lives of these amazing athletes.

Last week we kicked things off with Georgia Simmerling and Liz Rose. Next up? Canadian soccer defender, Shelina Zadorsky. Shelina won a bronze medal for Canada at the Rio Olympics in 2016 and plays full-time in the National Women’s Soccer League (NWSL) for the Orlando Pride. And we certainly have a lot of pride for this Canadian superstar. Let’s get into it with Shelina.

Ellen at The GIST (TG): You’ve been playing high-level soccer your entire life, and started representing Canada back in 2007 when you were only 14. How do you handle the pressure of playing for your country? Or do you thrive on it?

Shelina Zadorsky (SZ): I think pressure is such a mental game and I think like anything, with practice, I’ve found that my mental game has gotten stronger. The mental side of the game is undoubtedly important and we’re really fortunate that with Canada Soccer we have a mental coach and resources to strengthen that side of the game. It’s all about getting to know yourself as a player and figuring out what you need to make your mental game strong. When you’re putting in the work, you’re building the confidence to go out and proudly represent your country. It’s definitely taken a while to get good at this and when I was younger I was more nervous, but I often turn my nervousness into excitement now!

TG: What was it like being traded from Washington Spirit to Orlando Pride last year… especially as the captain of Washington?

SZ: Those (her time in Washington) were some really challenging seasons as an individual and as a collective team. We went from being in the championship game in 2016 to completely underperforming and having really poor results the next season. When things are going great everything is a little bit easier. Like anything, it’s a lot more challenging when you’re not winning especially when your job is to perform and win. It’s difficult. Underperforming led me to having a big growth year in terms of learning how to keep my confidence and to keep trying to lead the team. Altogether it was a good challenge to face.

Once I was traded I was actually really excited for a fresh start. Orlando made me feel really welcome which is hard because going from one team to another let alone one city to another is a big transition. You know when you play sports at a professional level that being traded is something that’s just part of the business. All in all the move went well and I’m really happy in Orlando.

TG: What is a misconception about female soccer and/or difference between the way men and women play?

SZ: Playing everyday I don’t hear the biases/misconceptions that much. Sometimes people say that the women’s game isn’t as physical, and that always make me laugh because it’s SO PHYSICALLY DEMANDING out there. It takes a lot of strength to play at the top level.

TG: And what about the theatrics of the men’s game (faking injuries and embellishing) vs. the women’s game. The women’s game seems to have way less of a dramatic flare.

I don’t know why the theatrics are different. It’s almost some sort of a cultural thing.  Men’s football has been prominent for so long and it oftentimes includes trickery and the theatrics. It’s almost like they think “if I dive here, I’ll be able to get a dangerous free kick” or “if I milk this injury I can slow down the game and swing momentum.”

The women’s game includes significantly less theatrics. It just doesn’t seem that it’s a part of the game and/or the culture. Sometimes we’ll play teams from Portugal or Spain and can see the tendencies of players embellishing - pieces of it - but on the whole way less than the men, which I really appreciate.

TG: Well, change is inevitable for really most roles in life. For us (the Canadian women’s national team), it came as a bit of a surprise with the timing (January 2018). We thought the plan was to go through the FIFA World Cup (in France this June) and the Olympics (August 2020 in Japan) with John. We had been with him for a while - I won a bronze medal in Rio with him and a lot of our veteran players had been with him longer than that. It was definitely surprising and sudden.

I think looking back now on how the transition went, the thing that helped us the most was being adaptable. Ironically being “adaptable” is also something our team uses to describe our play on the field.

My biggest piece of advice would be to roll with the punches. Can you be the best player/person you can even though something has caught you off guard? We had some history in the program with Kenneth being the assistant coach. While it was tough at the beginning, we took it in stride and now we all love working with Kenneth. When you’re adaptable it’s fun to be open to, and learn from, different experts.

TG: Okay I know I only said four questions, but, I want to ask you one more. How do you manage playing on the national team and your club team (the Orlando Pride) at the same time?

SZ: Yes so it’s a little bit confusing. There are designated “FIFA” windows where pro teams all over the world HAVE to release their players to their respective national teams, even if their club teams have games. Given this year is a World Cup year, there are a lot of FIFA windows and Canada will be using all of them.

For example it’s currently pre-season in Orlando but I’m with the Canadian team in Portugal for the Algarve Cup. And, the league has to allow all players to do that. It’s really important to have valuable training time and game time with Canada before the World Cup. And our pro-teams also know that when you train with your national team, it’s not like you’re taking a vacation. It’s a really hard-working and professional environment. So, while it will be hard to miss a lot of pro-games this season, I’m really looking forward to this year’s World Cup... and to play for Orlando again!

TG: That’s great. Alright to close things out, we have some fun with rapid fire questions:

What’s something that you can’t live without? Oh my gosh definitely peanut butter and almond butter.

What’s your go-to work out? If I’m in the gym I love doing explosive lifts including single leg workouts. If I’m running I like doing running intervals.

Peanut Butter or Jam? LOL like I said before it has to be peanut butter

Do you think the NWSL will ever make it’s way up to Canada? Yes, I really hope so!

Words you live by: Happiness, compassion and drive. And for the national team, we have a bit of a mantra. And I can’t tell you what it means, but they’re letters. The letters are TNT. *cue AC/DC’s TNT being stuck in your head all day*

And that’s The GIST of it.