We know you loved our F1 primer in March, so we’re back with another Special Edition motorsport newsletter. This time, we’re introducing you to the all-female W Series, which starts today. Vroom vroom, baby! 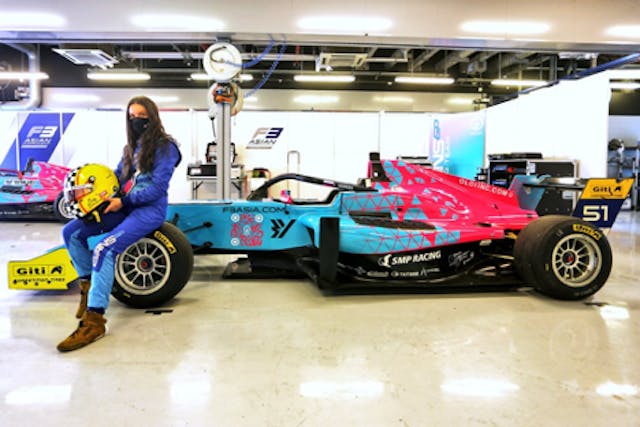 QUOTE OF THE WEEK

My parents wanted a princess but instead they got a racer.

—Irina Sidorkova, a 17-year-old Russian driver who will make her debut today as the youngest W Series driver. Badass.

🙋‍♀️ History of women in motorsport

Before we get into the W Series, let’s dive into a quick history of women in motorsport. While there are no official rules barring women from entering top racing series like Formula One (F1), NASCAR, IndyCar and MotoGP, motorsport has long been one of the toughest male-dominated industries for women to crack into...but not impossible.

But in F1’s 70-year history, only five women have entered — and only two have competed in — a Grand Prix race. The first was Maria Teresa de Filippis (who got into racing after her brothers said she couldn’t drive fast), and at the 1975 Spanish Grand Prix, Lella Lombardi became the only woman to score points.

These incredible women fought hard to race in the upper echelons of motorsport, but the biggest barrier in achieving equality has been the lack of sponsorship for female drivers.

Conceived in secret over two years, the W Series was announced in late 2018, ahead of the inaugural 2019 season. The series is free to enter (for reference, Mercedes paid nearly $5.5 million to race in F1’s 2020 season), and sponsorships are not required, eliminating that huge roadblock (pun intended) we mentioned.

Eight races on seven legendary circuits. Every W Series race this season will “support” F1, meaning the W series will compete on the same track every F1 weekend, on Saturday after F1’s qualifying.

Drivers compete for points each race using the same system as F1, with points accumulating over the season. The driver with the most points by the final race of the season — at Mexico’s Autódromo Hermanos Rodríguez circuit on October 30th — wins the W Series Championship.

🇬🇧Jamie Chadwick: A name that needs no introduction...but we’ll give you one anyway. Chadwick began karting at the age of 12 and was an ace from the get-go. In 2015, she won the British GT Championship in her first non-junior season, becoming the first woman and youngest-ever champion.

🇳🇱Beitske Visser: The W Series went virtual when the 2020 season was canceled, holding 10 iRacing races to fill the void. After finishing the 2019 season in second place, the Dutch Visser won the eSports championship, and will be back in a real car to contend for the 2021 title.

🇬🇧Alice Powell: The Englishwoman finished third in 2019, with one win, two second-place finishes and one third, as well as two unfortunate retirements. She has pole position today, and if she manages to finish all eight races this season, she could be the one to beat.

🇪🇸Marta García: Like most race car drivers, the Spanish 20-year-old got her start in karting. Six years ago, she won the oldest kart race in the world — the Trofeo delle Industrie — joining the ranks of past winners like Lewis Hamilton, Sebastien Vettel and countryman Fernando Alonso who all went on to become F1 World Champions. Sign of things to come?

🇫🇮Emma Kimiläinen: The oldest competitor in the series, a 31-year-old from Finland, suffered a nasty crash in the third race of the 2019 season, which reinjured a lingering neck sprain (and as we know, strong necks are very important in racing). The Finn came back to win 2019’s fifth race and finished the season fifth overall.

🇺🇸Sabré Cook: The only North American on the grid this season, the Coloradan (who is also a mechanical engineer, NBD) is set for her best racing season yet. Unlike most of her European competitors, Cook’s ultimate goal after the W Series is making it to IndyCar à la Danica Patrick, and we have no doubt she’ll dominate.

The season starts today at 10:30 a.m. ET on TSN in Canada and coverage in the U.S. starts at 9 a.m. on beIN Sports. Be sure to follow the W Series on Twitter and Instagram for all the live action. Start your engines!