It's not over 'til it's over

Welcome to The GIST’s Sunday Scroll, where we dive deep into one timely sports topic. 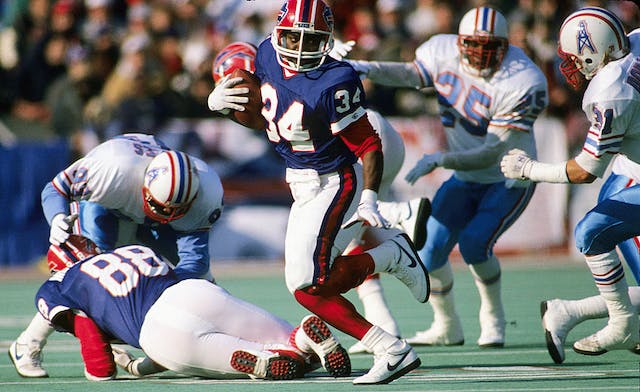 It’s the final day of the Ryder Cup, which got us thinking about that insane Team Europe comeback in 2012, which then made us think about other insane comebacks.

"I almost never, ever, ever give up, but at that point, I kind of did give up."

— Barb Beebe, mother of former Buffalo Bills wide receiver Don Beebe, talking about the 1992–93 AFC Wild Card game before the comeback. Read on to see why you really can’t blame her.

You can’t start a newsletter about comebacks without the game literally called “The Comeback.” The year was 1993. It was a blustery January day in Orchard Park, New York. And the home team, the Buffalo Bills, was down 32 points to the visiting Houston Oilers early in the third quarter of the AFC Wild Card game.

Before leading the Bills to history, the aforementioned Frank Reich played backup QB for the NCAA Div I Maryland Terrapins. After starter Stan Gelbaugh failed to lead a scoring drive in the first half of a 1984 game, Reich replaced him against the defending national champion Miami Hurricanes.

That record stood until 2006, when Northwestern took a 38–3 lead over Michigan State with 9:54 left in the third quarter. Neither team was particularly good that season, so no one predicted that this relatively low-key regular-season game would end up in the record books.

Of course QB Tom Brady is somehow involved. By February 2017, Brady and his then-New England Patriots had already racked up four Super Bowls, and he was making his record seventh Super Bowl appearance (he’s broken that record three times since), this time against the Atlanta Falcons in Super Bowl LI.

Halfway through the third quarter, the Falcons had a 28–3 lead, and ESPN estimated their odds of winning the game to be 99.8%. And then the unimaginable happened. With three unanswered TDs from Brady et al. plus a FG, the Pats tied up the game in the final minute to force OT.

At the Tokyo Olympics this summer, Dutch runner Sifan Hassan won gold in the 5,000m and 10,000m and bronze in the 1,500m, becoming the only athlete ever to medal in all three events at the same Olympic Games. But to get there, she mounted a comeback that you had to see to believe.

During a heat for the 1,500m, Hassan tangled up with Kenyan runner Edinah Jebitok at the start of the last lap. Despite fully falling onto the track, Hassan picked herself up, rejoined the pack of racers who had pulled ahead of her, and then passed them to win the heat. Down but never out.

The Curse of the Bambino began in 1920, when the Boston Red Sox sold baseball legend Babe Ruth to the New York Yankees. The Red Sox had last won the World Series in 1918 with Ruth, and despite some success over the decades after he left, the team was never able to win another championship...until 2004.

The Red Sox faced the Yankees in the best-of-seven American League Championship Series (ALCS) that year, in a rematch of the previous season’s ALCS (won by the Yankees). The Red Sox seemed to be dealt a similar fate, going down three games to start the series.

And Boston never looked back. The Red Sox won the next three games, marking the only time in MLB playoff history that a 3-0 series lead was erased. The icing on the cake? Boston went on to win the World Series, ending the 86-year championship drought and The Curse.

The comeback that inspired us today. The Ryder Cup is a rare team competition in the solitary game of golf. Twelve Americans and 12 Europeans face off every two years to win literally nothing but a small trophy and eternal bragging rights.

Ballesteros died in 2011, a year before his best friend and Ryder Cup teammate José María Olazábal captained Team Europe in the 2012 Ryder Cup at the Medinah Country Club. That Ryder Cup got off to a rough start for the Europeans, and by the end of Day 2 in the three-day event, Europe was down a seemingly insurmountable four points.

They won eight and a half points. Though some Americans still refer to it as the “Meltdown at Medinah,” golf fans from both sides of the Atlantic agree that the “Miracle at Medinah” was indeed a European comeback for the ages, inspired by their fearless leader Olazábal and dedicated to his friend Seve.